Half of the top ten most reliable cars in their category sold in the UK are from Japanese brands, a new owner-satisfaction report from What Car? has found.

But while it was good news for Japan, it was not so great for UK car making, with the Range Rover Sport, Jaguar XE and the British-built Nissan Qashqai coming bottom of their respective categories.

Overall, nearly a third (30 per cent) of motorists with cars of up to three years old suffered at least one fault with their car over the previous 12 months, the report said. 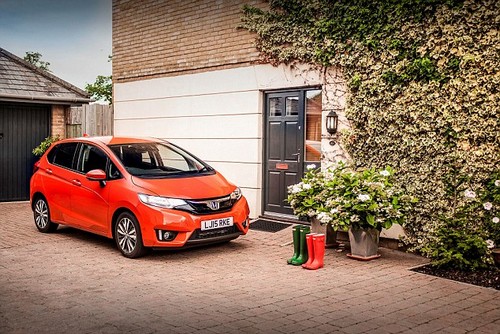 Good news for Honda Jazz owners: The small hatchback may not be famed for its thrilling driving but it did top the reliability league, with a 100% score

Britain’s hugely-popular Range Rover Sport diesel emerged as one of the worst performers with 60 per cent of vehicles suffering issues, the lowest overall breakdown reliability rating of any car reviewed and some examples being ‘off the road for a week’ while they were fixed.

That stood in contrast to the astonishing 100 per cent reliability scores racked up by four cars: the Honda Jazz, Toyota Aygo, Lexus CT200h and Audi A3, all of which owners said had been fault-free throughout the year.

Overall, six in ten of the top car makers for reliability were Japanese brands, the report found.

Lexus, the luxury arm of Toyota, tops the league table of car makes least likely to break down with owners reporting a 92.1 per cent reliability rating in the real word study of more than 14,000 vehicles no more than three-years old.

But propping up the bottom of the league table is Jeep with fewer than half (42.1 per cent) of vehicles proving reliable, just ahead of Land Rover (50.6 per cent) and electric car firm Tesla (52.4 per cent), revealed the research.

Japanese cars also topped five out of 10 vehicle category classes for reliability with the Honda Jazz, Toyota Aygo and Lexus CT200h taking the crowns as the most dependable small car, city car and family car respectively.

The Nissan Leaf was hailed the most reliable electric vehicle – making up for an unexpectedly poor performance by the car-maker in other areas – and the Mitsubishi Outlander was branded the most robust of all the large SUVs on the market. 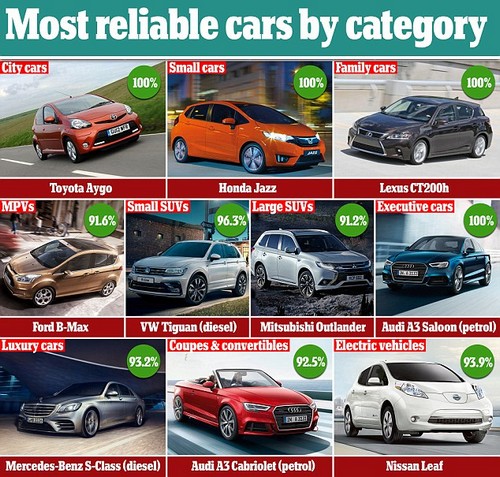 Most reliable cars by category 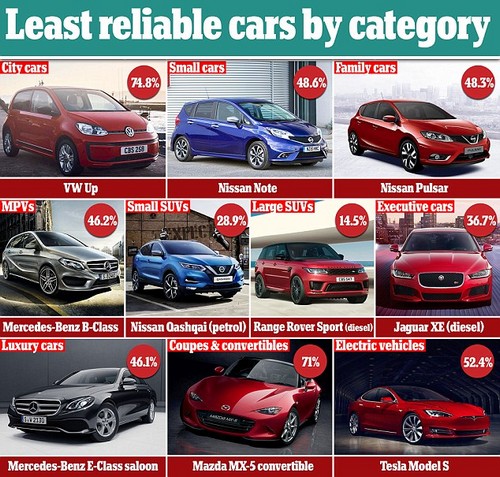 Although Italian cars are not always renowned for their reliability, Alfa Romeo (85.8 per cent) took a shock fifth spot in the league table of car-makers’ reliability.

That’s despite the brand being synonymous with electrical faults on models from the past and present day.

How are cars rated?

Owners of cars aged from new to three years old were asked to report on faults which occurred in the last 12 months, by What Car?.

In total, What Car? received enough feedback from 14,000 car owners to report on 169 models across 32 different brands.

Full details are published in the latest issue of What Car?, on sale from today and online at www.whatcar.com/news/reliability-survey

That put the stylish Italian marque just ahead of one of Japan’s most trusted manufacturers, Honda (84.9 per cent), which builds all Civic hatchbacks for the global market in Swindon.

Disappointingly for them, Mazda was down in 16th place (77.9 per cent) with fellow Japanese maker Nissan – which builds the Qashqai at the brand’s UK factory in Sunderland – struggling down in a lowly 29th place (52.7 per cent).

There was positive news  for German brands, too, including under-fire Volkswagen.

The car manufacturer, which is still suffering from the ramifications of its 2015 diesel emissions cheating scandal, produces the most reliable small SUV, the Tiguan diesel with a 96.3 per cent score.

Audi, which is also part of the Volkswagen Group, topped the charts with the A3 saloon (best executive car, 100 per cent) and A3 Cabriolet (best coupe convertible, 92.5 per cent), which were both voted as the most dependable motors in their categories. 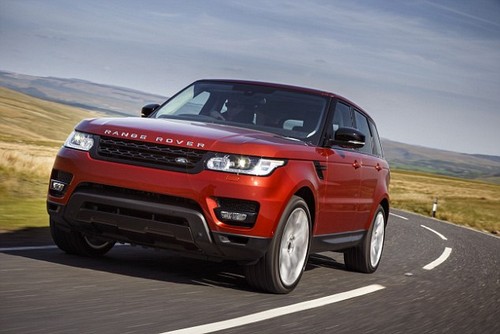 At the bottom end of the scale, the least reliable large SUV – and least reliable of all cars – is the £61,000 Range Rover Sport diesel, with an comparably appalling reliability rating of just 14.5 per cent.

What Car? noted: ’Worryingly 60 per cent of Range Rover Sport diesels had problems. They spanned a wide range of areas, the most serious of which were the gearbox, drivetrain, engine and suspension.

‘Not all cars were fixed under warranty and some were off the road for more than a week.’

Less positive for VW was the performance of its city car, the Up, which was voted the least reliable car in its class with a 74.8 per cent reliability score – despite it being one of the most expensive models on sale.

Worst family car was the Nissan Pulsar (48.3 per cent) and the least reliable MPV was the Mercedes-Benz B-class (46.2 per cent).

The award for the least reliable small SUV is the Sunderland-made Nissan Qashqai petrol (28.9 per cent). 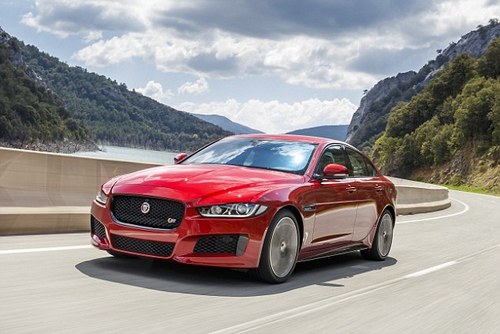 The least reliable executive car was the Jaguar XE diesel, according to What Car?’s survey

Of all the executive cars reported on, the Jaguar XE diesel (36.7 per cent) received the worst score.

Jaguar didn’t prop-up the charts in the luxury car class, though – that unwanted award went to the Mercedes-Benz E-Class diesel saloon (46.1 per cent) – a car that costs between £36,000 and £108,000 depending on which diesel engine and spec you choose.

Surprisingly, Mazda’s MX-5 convertible – a car that in previous years has been rated highly in satisfaction surveys – was named least reliable coupe or convertible (71.0 per cent).

And the results won’t do much to cheer Elon Musk, with the least reliable electric car mantle going to his £65,000 Tesla Model S (52.4 per cent) 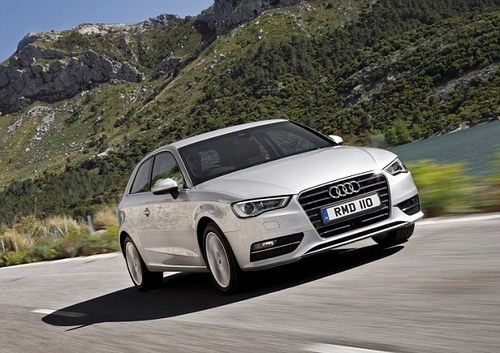 The Audi A3 was the only non-Japanese car to score 100% reliability in the What Car? survey 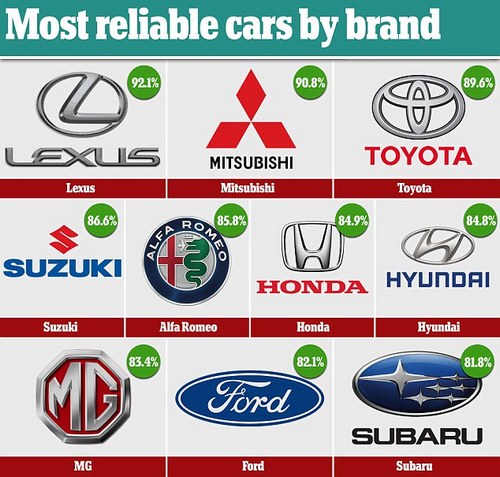 What Car? editor Steve Huntingford said: ‘Japanese brands continue to lead by example when it comes to reliability. The breadth of vehicles with near-faultless scores highlights the engineering prowess of Far Eastern manufacturers.

‘It is also encouraging to see that German car manufacturers are backing up their reputation for quality with strong reliability scores.

‘The old adage that cars are getting more complicated and harder to fix needn’t be an anxiety – as long as consumers choose the most reliable model.’

UK demand for Japanese cars is on the rise

UK consumer demand for Japanese car brands has risen 38.2 per cent in five years, with more than 352,800 registrations in first three quarters of 2017 alone.

They now represent represent 17.1 per cent or around 1 in 6 of the UK new car market, according to the Society of Motor Manufacturers and Traders (SMMT).

Japan is Britain’s sixth biggest export market, and the second biggest in Asia after China.

Japanese-owned car-plants in the UK – such as Nissan, Honda and Toyota – also account for half of British car production in a relationship going back 36 years.

Speaking at the Tokyo Motor Show, SMMT chief executive Mike Hawes said: ‘This summer’s agreement of an EU-Japan Free Trade Deal is welcome news for both our industries.’

The UK is also the EU’s second biggest automotive market after Germany. 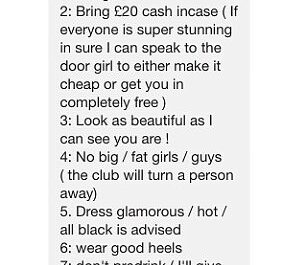 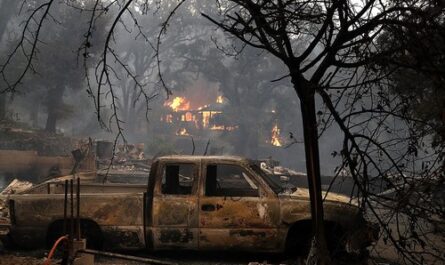