More than 225 firefighters tackled a large grass fire in east London that sent smoke billowing over the capital throughout Sunday afternoon.

The fire began at around 3pm and was still smouldering at 9pm by which time the flames had been extinguished and firefighters were damping down the scorched earth.

The cause of the fire, which could be seen for miles, was not known in the immediate aftermath of the blaze.

Forty fire engines attended the scene of the blaze, which stretched across 100 hectares (247 acres) of Wanstead Flats, in the south of Epping Forest near Stratford.Emergency services began to arrive at about 4pm after receiving more than 110 calls.

Residents were warned that they may have to evacuate their homes. Road closures were imposed and the Metropolitan police warned people to avoid the area. 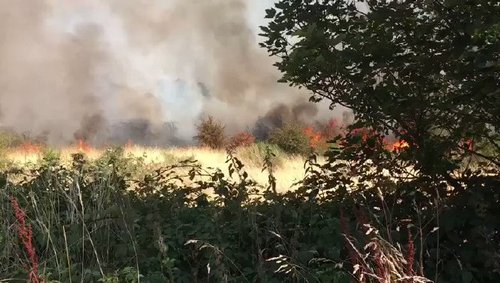 Rob Davies, a London fire brigade (LFB) group manager who is at the scene, said: “This was a large grass fire and while Wanstead flats is an area of grass land, crews had to work very quickly to stop it from spreading. Smoke was making conditions very difficult for firefighters and causing a lot of disruption to local roads.

“Grass fires can embed into the ground and so while it is now smouldering, crews will be there into the night to keep damping down the earth. It can take a long time to properly stamp out a grass fire and while we expect to have crews at the scene for some time, we will reduce the levels of crews and equipment which will also help get roads moving again.”

Davies said the LFB had attendedmore than 20 grass fires this month as the hot weather made the ground especially dry. 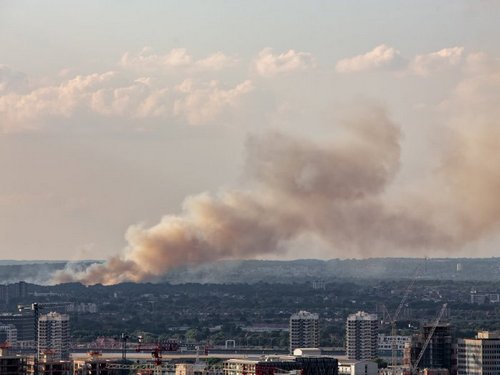 Mike Power, a resident of Aldersbrook Road adjacent to the park, said: “There are multiple plumes of smoke, which are possibly arising from separate sources and I can occasionally see flames coming up from the overgrowth. Police are telling people on my street to make preparations in case we are told to evacuate.”

#NPAS61 assisting @MPSRedbridge @MPSWForest @MetTaskforce and other officers from @metpoliceuk keep members of the public safe while road closures and diversions were put in place to allow the @LondonFire attend and deal with a large grass fire on Wanstead Flats. #Teamwork pic.twitter.com/EZ85QSJWhW

Ambulances and police vehicles attended the scene, along with fire engines from stations including Walthamstow, Leytonstone and Hainault.

Cann Hall police, which is part of the Met force, tweeted: “It is confined to the grass area, so please stay put, but close windows as smoke/ash is not the best for big or little lungs. Police will visit door-to-door to advise on evacuation if the situation changes.

“As tempting it is to get closer for a look, please stay away from the area. LFB are extremely busy fighting it, but fire can be unpredictable, spread quickly, or even surround you. Do not make their job harder!”