Thanks to the Obamacare mandate that insurance plans cover contraception, women and families across the country are paying less in out-of-pocket health care costs, and the rates of both unintended pregnancies and abortions are down. 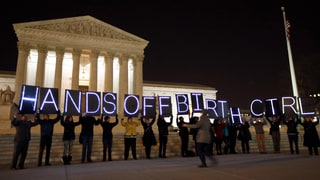 Who could possibly object to that? Republicans.

On Friday morning, President Trump followed through on part of the GOP’s long-standing objection to the contraception mandate and rolled back the requirement for many employers.

This controversy dates back to the early 2000s, when women who used prescription contraceptives and received health insurance through work were subject to the whims of their employer as to whether that contraception was covered. When it wasn’t, some women sued, making the sensible claim that an employer that covered preventive medicine for men but refused to cover contraception for women was discriminating based on sex, in violation of federal law. Those lawsuits bounced around the lower courts, with some women winning, resulting in them gaining coverage, but others losing, leaving many women to pay for contraception out of their own pockets, unlike almost all other medicine under their health plans.

With varied outcomes in the lower courts, and the Supreme Court not taking any case to resolve the issue, states started to get involved. Twenty-eight of them passed laws requiring insurance plans that covered preventive medicine to also include contraception. Those laws varied in many ways, including a majority that allowed for some exemption for religious entities. But there was a growing consensus in the first decade of the 2000s that contraceptive coverage was important for women and society. The trend was so strong that even Arkansas Gov. Mike Huckabee – no women’s rights advocate, he – signed a contraceptive coverage law in his state.

Obamacare turned that state-based trend into a national requirement. As part of the law, insurance plans were required to cover essential preventive medicine at no cost. The Obama administration issued a rule saying that all forms of contraception were essential. The rule included an exception for places of worship, but otherwise covered all insurance plans.

And with that, the issue was settled: All prescription contraception was free of cost to anyone with health insurance. This was huge. Contraception is not as costly as in-hospital medical care, but it can cost up to $50 per month for birth control pills or $1,000 or more for an IUD. For many women across the U.S., these costs are difficult to bear – but with Obamacare, they were covered. As a result, women saved more than $1.4 billion in 2013, and most experts believe the unintended pregnancy and abortion rates in the country dropped because of the change as well.

But the GOP wouldn’t let this progress stand. Once contraception became a part of the dreaded Obamacare, Republicans did everything they could to stop it. They introduced legislation to allow for exceptions based on moral objection to contraception. That went nowhere because Obama was still president, but they were successful at the Supreme Court, where the justices ruled that Hobby Lobby, a corporate entity, somehow had a religious objection to contraception, so it should not be required to cover birth control for its employees.

And then the Trump era came along.

On the campaign trail, Trump vowed to punch even more holes in the Obamacare mandate, which he finally did on Friday. Effective immediately, any entity that has a religious objection can opt to carve out contraception from its insurance coverage provided to employees. Even more broadly, any entity other than a publicly traded company that has merely a moral objection to contraception can do the same.

The Department of Health and Human Services estimates that 99.9 percent of women who receive contraception under Obamacare now will continue to do so. However, that estimate is based entirely on the very small number of businesses and religious groups that have filed lawsuits against Obamacare. Now that the exception is enshrined in law, there is no doubt that more employers will follow suit, and more women will suffer.

Expect a new round of litigation to follow, this time brought by female employees and women’s rights organizations. As was the case before Obamacare, employers are still bound by federal and state laws prohibiting discrimination based on sex: an employer that covers the full range of preventive medicine for men but not for women is violating those laws. Congress could change this, but an order from the Trump administration cannot change that now-fundamental principle of law.

In the meantime, while these new lawsuits wait to be filed and then resolved, women will suffer, particularly low-income women. They will once again have to scrounge up the money to pay for essential health care – money that would otherwise go to housing, food, their children’s needs or other necessities. Or, if they can’t afford to do so, they’ll go without contraception and risk all that an unwanted pregnancy brings with it.

The irony, of course, is that unwanted pregnancies are much more expensive for insurance companies and employers than contraception. But President Trump and the Republican Party have shown over and over that they will do whatever they can to risk women’s health and position in society. This change to Obamacare is no different.

Trump on North Korea: ‘Sorry, but only one thing will work!’