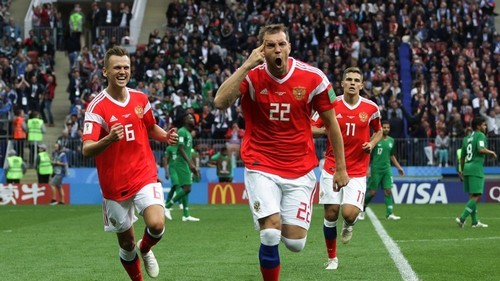 FIFA on Sunday rejected a British media report alleging doping cover-ups among Russian national team football players, saying it had not found any evidence of doping among Russia’s players as the country hosts the World Cup finals.

Reiterating a statement it made last month, FIFA said “insufficient evidence was found to assert an anti-doping rule violation by any footballer.”

It added that the investigations opened against players named to Russia’s preliminary squad last month had been closed.

Rubin Kazan defender Ruslan Kambolov, investigated by FIFA over alleged doping violations, was named in Russia’s preliminary squad last month but later sustained an injury and was left out of the final selection.

“In the course of the investigations FIFA looked at every possible evidence, leaving no stone unturned,” the global football governing body said.

FIFA launched investigations into possible anti-doping violations by Russian soccer players after a report commissioned by the World Anti-Doping Agency (WADA) found that more than 1,000 Russian competitors across more than 30 sports – including football – were involved in an institutional conspiracy to conceal positive drug tests.

A Short History of Kazan Arena

Russia has rejected allegations it has run a state-sponsored doping programme and elaborately covered up its athletes’ positive tests at the 2014 Sochi Winter Olympics.