Several months of delay can result in the debtor being left homeless. Even if he has the only one. Mortgage debt is the most common reason for eviction from an apartment. When buying a home, ownership is registered with the encumbrance, so if the mortgagee does not pay, the apartment will go to the bank.

Even if it is the only one, but children, disabled people or otherwise socially unprotected people live in it. We recently told a story from Yekaterinburg: due to a delay of 40 thousand rubles, the bank sold an apartment to a large family.

At the same time, money was collected in Ufa for a single father: after the death of his wife, he was left with three daughters and an unaffordable mortgage. Both stories ended well because they got a lot of publicity. However, situations happen much more often than the media write about them.

The mortgagee needs to remember that the bank can take housing under two conditions:

And even here, the creditors will not come immediately with the eviction, but first they will show a paper on the termination of the transaction.

– The proposal to terminate the loan agreement is not yet an eviction or sale of your home. Thus, the bank says that the terms of the transaction have been violated and asks to return the loan amount, ”explains Denis Valdeev, an expert on real estate issues, a lawyer at Benefactum. – The borrower can find money, he has several ways, including restructuring or a new loan.

The first thing that experts advise the debtor is not to run away from the bank, but to come to him right away to solve the problem. Explain the reason why it is not possible to pay the previous amount, and ask for a loan restructuring – to change the monthly amount and the payment schedule. You can restructure a loan both at the bank where you took out the mortgage, and at others. 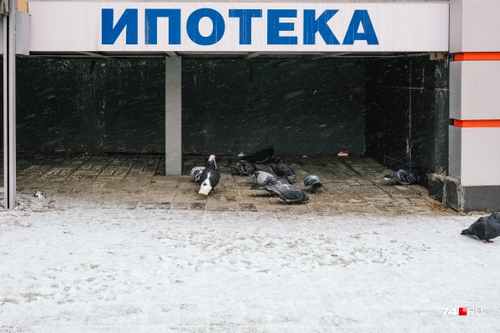 The lack of timely feedback, experts say, let our hero from Ufa down. When Demchenko faced financial difficulties, the head of the family chose not to pay the loan for a while.

“There was not enough money, of course,” admitted Bogdan Demchenko. “But I always paid as much as I could. I bought groceries, everything I needed, and sent the rest to the bank.

The man should have applied for restructuring before the delay went.

“The bank is the same interested person in this matter as the debtor: it is more convenient for him to receive monthly payments than to sell an apartment,” says Denis Valdeev. – In this case, you should immediately call the bank directly or your personal manager, indicate the reasons for the delay, and discuss repayment options. Feedback guarantees to the bank that you are ready to deal with the issue constructively and you will not have to be evicted later.

Since the summer of 2019, mortgage vacations are given to the borrower only once and allow them to legally not pay for the loan for six months. True, for this the mortgagee needs a difficult life situation – the loss of a job or a significant decline in income, a prolonged sick leave, or more than two months of disability. At the same time, credit housing should be the only one, and its cost should not exceed 15 million rubles.

– The beginning of the grace period, its terms, as well as the amount of payments are determined by the borrower himself. All this he must indicate in his request sent to the bank, – says the head of the mortgage department of UBRD Lyubov Toropitsyna. – If the client, for some reason, did not indicate the duration of the mortgage vacation and the date of their start, then, according to the law, the grace period is considered equal to six months, and the start date is the date the claim was sent to the bank.

You can leave the holidays at any time. And the interest that you will not pay during the deferral will not be considered a material benefit, respectively, you do not need to pay the maximum personal income tax from them.

Option # 3: postponement due to coronavirus

Some debtors received relief until March 31, 2021: the Bank of Russia recommended that lenders not demand the sale of mortgaged housing if the borrower or his family members fell ill with the coronavirus or their income dropped sharply due to the pandemic. Even those who have been on a mortgage vacation before the pandemic can count on holidays due to the coronavirus.

– If the citizen was previously granted a grace period or his loan (loan) has already been restructured, the Bank of Russia recommends extending the restructuring for up to three months from the date of application under the terms of the restructuring programs existing with the lender, the Central Bank said in a statement.

However, so far the Central Bank has not announced the extension of its recommendation, so it is possible that from April the pandemic will no longer be considered a good reason.

If you receive a notice of termination of the contract, you do not need to think that you are being evicted: the bank is still asking for a refund, and the borrower has time to find it. Borrow, take another loan, or even tell the whole world about your misfortune. Actually, as our heroes from Yekaterinburg and Ufa did. A local oligarch helped the Dorgoev family, who had delayed their mortgage, – his charitable foundation paid 40 thousand of the delay and the balance of the loan – half a million rubles.

“After the reportage, lawyers, the ombudsman, journalists approached us, everyone wanted to help,” the head of the family, Maxim Dorgoev, told E1.RU. – In the meantime, we have submitted documents to the court, as recommended by the lawyer. When Alexander called from the St. Catherine’s Foundation, I did not understand what was happening, we thought that these were some kind of scammers or a joke.

Father with many children, Bogdan Demchenko, in a few weeks managed to collect a million from those who were not indifferent who saw his story. The man closed part of the debt and agreed with the bank to restructure the payment.

– The monthly payment was set even lower than I myself suggested. I offered 15 thousand rubles, but I was told that taking into account the circumstances in our family, it might be better to appoint 10, – said Bogdan Demchenko.

Option number 5: sell an apartment at a higher price

If the matter nevertheless comes to the sale of housing, the debtor has the option to sell the apartment at a higher price, because at the auction it will go below the market price. But, as a rule, the bank is not ready to wait long and agrees to this option only when the borrower has already found a buyer.

– The sale of the subject of the pledge is an expensive and time-consuming procedure, therefore, most often the apartments are sold below the market price. The amount of money that the bank will receive will be used to close the loan debt, ”explains lawyer Denis Valdeev. – The remainder of the funds goes towards payment of performance fees and bidding. If after all this, something remains from the sale of housing, the money goes to the debtor, but this rarely happens. An independent search for a buyer will allow the sale of housing at a higher price, and such assistance is viewed by the bank as a positive factor. The debtor finds a potential buyer, presents him to the creditor, then the transaction procedure is agreed. Both the bank and the debtor will win.

According to this scenario, events will develop only if the debtor himself comes to an agreement with the bank. Last year, State Duma deputies tried to make this point mandatory and even wrote a whole bill.

In December 2020, the bill was adopted in the first reading, but since January 2021 it seems to have been forgotten. We hope that the document does not await the fate of another important law that simplifies the sale of an apartment in which maternity capital has been invested: last summer, a saving bill for many Russian families passed the first reading and got stuck.

Now the auctions are held on electronic platforms, the bailiff service and the Federal Property Management Agency are engaged in the sale of housing. The debtor himself cannot participate in the auction. The collection procedure – from the termination of the loan agreement to the sale of an apartment at an auction – takes from several months to a year. And at all stages, the borrower can pay off the debt in full, then the housing will remain with him. If the auction does not take place, the bank will take the housing for itself, you can try to negotiate a buyback. In this case, the bank has the right to set any price or even refuse to sell you your former home.

Novosibirsk universities began to strengthen security after the tragedy in Perm