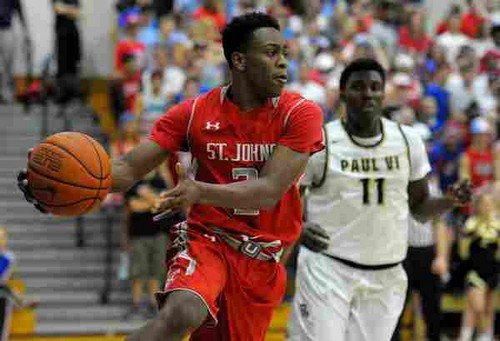 Below is what you need to know ahead of the upcoming decisions for Harris, Wood and Pfaffenberger.

Since announcing his final eight schools in July, Harris has not publicly cut any other programs out of his recruitment.

But the 6-foot-8 forward has indicated some top options with where he has taken official visits. Harris visited West Virginia in mid-September, Rhode Island a bit later in the month and Xavier this past weekend. Harris originally scheduled official visits to Kansas and Miami in the coming weeks, but he will now make his decision before seeing those schools. Along with West Virginia, Rhode Island and Xavier, a person with knowledge of Harris’ recruitment said that South Carolina is also in the running.

The final eight Harris announced in July was Kansas, Maryland, Xavier, Miami, West Virginia, South Carolina, Rhode Island and Southern Utah. He is the area’s best 2018 big man and has the ability to score from the perimeter and inside the paint.

If Wood verbally commits to George Mason, he would be the second D.C.-area senior to pledge to the Patriots’ 2018 class. George Mason landed the verbal commitment of Loudoun Valley guard Jordan Miller, a 6-foot-4 lefty scorer, at the start of September. Wood and Miller would give the Patriots a very solid backcourt into the future, with Wood’s ability to space the floor from the point guard spot opening up driving lanes for Miller, who likes to go to the rim. Wood is also a very solid slasher and his ability to get inside the paint creates a lot of scoring opportunities for teammates.

But Wood, who played his AAU ball for Team Takeover, seems to have a few schools still in the running.

“With Tre, I think you get a lead guard who is going to be able to step into a program with incredible experience at the high school and AAU level,” St. John’s Coach Pat Behan said on Monday. “You get a kid who can run an offense, is a really good on-ball defender and can create for his teammates, too.”

Football or basketball? In age of CTE and AAU, it’s a tough call for players, parents

The 6-foot-8 forward said Monday that these three programs have been in on him since the beginning of his recruitment. They have also stayed in constant contact in recent months, he said, and now have a chance to add a high-energy, versatile big man to their 2018 class. Pfaffenberger has shed 35 pounds since his freshman season and expanded his offensive game to the perimeter before his junior year. Now he considers himself a viable threat from midrange and beyond the arc, and said he can put the ball on the floor from those spots.

“I had to change up my game so I could work inside and outside,” Pfaffenberger said. “I think that makes me a good fit at the next level, a bigger guy who can stretch the floor and do a lot of things.”

If Pfaffenberger chooses Mount St. Mary’s, he would be the third local senior to verbally commit to the Emmitsburg, Maryland school. The Mountaineers have already received pledges from Bullis point guard Vado Morse and O’Connell shooting guard Matt Becht.

» DeMatha junior guard Justin Moore picked up offers from Villanova, Maryland and Penn State in the past week, he and DeMatha Coach Mike Jones announced on Twitter. Moore, who missed most of his sophomore season and all of this past AAU circuit after tearing his anterior cruciate ligament last January, now has offers from the Wildcats, Terrapins, Notre Dame, Louisville, Xavier, Wake Forest, Penn State, Old Dominion and Towson. Moore is 6-foot-3 and plays AAU basketball for Team Takeover.

» Severn School senior guard L.J. Owens took an official visit to William & Mary this past weekend, D.C. Blue Devils Coach Ricardo Rush told The Post on Sunday. Owens took an official visit to Saint Joseph’s the weekend before that, and is planning official visits to Delaware and Quinnipiac, according to Rush (Owens played for Rush on the Blue Devils’ 17U team this past spring and summer). Rush also said that Boston University is making a late push into Owens’ recruitment. BU – which was not in the final seven schools that Owens released in early September – offered the 6-foot-3 guard in mid-September, and Rush said Owens is now considering taking an official visit there.

» Springbrook senior guard Matt Balanc will take an official visit to Florida Gulf Coast this weekend, Mid-Atlantic Select director James Lee told The Post on Sunday. Balanc, a 6-foot-3 guard, is choosing among Florida Gulf Coast, Rhode Island and Quinnipiac, a final three he announced in September. He was not being heavily recruited until this summer, when strong showings in the three July evaluation periods (while playing for Mid-Atlantic Select) earned him 10 scholarship offers.

How college hoops corruption became a federal investigation, and why it might get bigger

The 2018 world Cup for doctors of St. Petersburg completed