Sports-dance flashmob we started the holiday the guys from the volunteer club “rainbow of good” the club “ERA” smart camp “Erudit” school № 6. In the bright dance was attended by Director of “Blackbird” Michael Gowdy, leading specialist of the Department on sports Konstantin Yesenin and midfielder club “Ufa” and the youth national team of Russia on football Ivan Oblakov. Captured video of the flash mob will be directed in support of the Russian team at the world Championship on football of 2018. 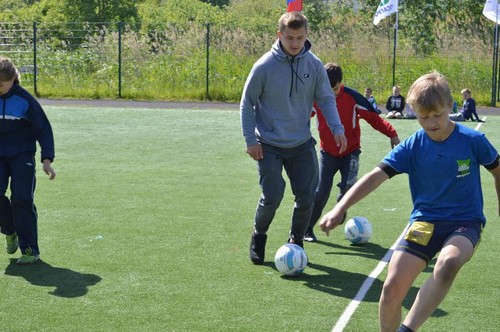 The parade open out 78 players ages 8-11 and 12-14 years. With a salutatory word to the guys asked the Deputy head of administration of the Volkhov district Svetlana Koneva, Director of the ANO “BLACKBIRD-Volkhov” Michael Gowdy and a representative of the charity Fund of development of children’s sports and Patriotic education “Volkhov Front” Vyacheslav Kiselev.

The participants, organizers and many supporters are warmly thanked for the invitation to the feast of our countryman, a native of the Island Wingina Ivan Oblakov. Before matches, the pupil of St. Petersburg Academy “Zenit” now player “Ufa” and the main “youth” of the country gave a master class Volkhov boys and girls.

In the first domestic tournament of “Active summer-2018” took part 5 teams of players of Junior age (8-11 years), including two teams of girls, and 8 teams in the older age group (12-14 years). In the dispute Junior won “Zabivki”; silver prize-winners of the “Age,” “bronze” y “falcons”. Among the older guys won “Volkhov Front”, second “the eagles”, third in “Iris”.

The girls first played on a circular with the boys, and then held a friendly match among themselves. In this debate teams “Tatiana-2” and “Crostata” won the latter.

The winning teams were awarded with cups, medals, diplomas and awards traditional team tournaments “Active summer” balls and goalkeeper gloves. For the second and third place teams also received trophies, medals and certificates corresponding advantages. All the players of the teams who won prize places, were awarded with sweet prizes and Souvenirs with symbols of the 2018 world Cup.

The organizers of the sports festival expressed confidence that successfully launched Active summer as well and will continue. In the 2017 season in domestic football tournaments and street ball organized by the division for sport, ANO “BLACKBIRD-Volkhov” and “Volkhov Front”, was attended by over a thousand boys and girls from the entire district. This summer these competitions planned much more to football and streetball organizers attached mass chess tournaments for everyone and also outdoors.

In Portugal, Neymar made a hero of the campaign against false emergency calls

The Portuguese emergency service used a photo of a star of the Brazilian national football team Neymar in the social campaign against false emergency calls.

The poster posted on the page of the Portuguese National Institute for medical emergencies (INEM) on Twitter, Neymar lies on the field and screaming in pain, it staggers the player of the opposing team. Photo is accompanied by the inscription: “75.8 per cent of calls to the 112, too, are not emergencies.” The post has already gained more than 6.5 thousand likes.

The Brazilian Neymar is often accused of simulations on the football field. As previously reported by the media, for 4 matches of the 2018 world Cup striker lay on the lawns of Russian stadiums, a total of 13 minutes, 50 seconds.

“Falcon” (Saratov) have signed a midfielder and striker 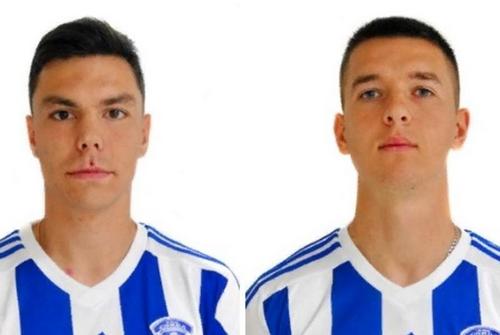 A graduate of the Metropolitan school-44 “red guard” 25-year-old striker Fedor Dvornikov (pictured right) played in the youth team of “Rostov”, “the Biologist-Novokubansk”, “Khimki” and “the Dynamo-SPb” (2018). In 94 matches of the championship scored 20 goals in eight games of the Cup of Russia – 2.

Midfielder Denis Anisimov, 22 years. He began his career in SDYUSHOR Sokol, then there was the youth team of the Moscow “Locomotive” (3 seasons), Podolsk “Vityaz” (1) and “the locomotive-Kazanka” (1. On account of his 19 goals in 116-year matches of the championship, and 2 matches of the Cup of Russia.

The 2018 world Cup for doctors of St. Petersburg completed