A US federal judge rejected on Thursday an effort by the Trump administration to begin construction on a wall on the border with Mexico while it appeals a ruling that found funding for the wall was likely not authorised by Congress. 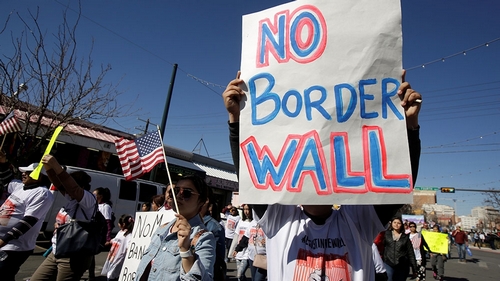 A man holds a sign during a march against building a wall on US-Mexico border [File: Jose Luis Gonzalez/Reuters]

US District Court Judge Haywood Gilliam in Oakland, California said in a written order the government was unlikely to prevail on the merits of its appeal, and, therefore, failed to justify a stay of a preliminary injunction issued last Friday.

A spokesman for the Department of Justice did not immediately respond to a request for comment on Gilliam’s order. The government said in a court filing it needed a stay of Friday’s injunction to begin wall construction in Arizona and Texas and stem the flow of illegal drugs.

The Trump administration has said it plans to redirect $6.7bn from the Departments of Defense and Treasury towards wall construction, after failing to convince Congress to provide the money.

Last Friday, Gilliam blocked the administration’s initial transfer of one billion dollars, finding that redirecting the funds from other programmes likely violated the separation of powers principles.

The government has appealed, and can still ask the 9th US Circuit Court of Appeals to stay Gilliam’s injunction during the appeals process.

On Wednesday, civil rights groups and 20 states began round two of what is likely to be a prolonged battle over wall funding.

The groups and states asked Gilliam to prevent the Trump Administration from redirecting an additional $1.5bn that Congress had approved for the military, according to a court filing.

A spokesman for the Department of Justice declined to comment.

As more transfers are made, the plaintiffs are expected to respond by seeking further injunctions.

The latest request seeks to block the use of $1.5bn that was transferred by the Department of Defense in early May.

The injunctions were requested by the Sierra Club and the Southern Border Communities Coalition, which are represented by the American Civil Liberties Union, as well as 20 states led by California and New Mexico.

Congress has approved $1.38bn for “primary pedestrian fencing” in southern Texas, which was agreed to after a protracted battle and a government shutdown.

When making the case for its border wall, President Donald Trump often cites the need to stem illegal drugs from flowing into the United States, but rights groups point the government’s own statistics that show many drug shipments are likely smuggled through official ports of entry.

The Drug Enforcement Administration said in a 2018 report, for example, that “only a small percentage” of heroin seized by US authorities comes across on territory between ports of entry.

Separately on Thursday, Trump teased that he will make a “dramatic” statement about the border this week.

He told reporters the statement on Thursday or Friday would be his biggest on the issue to date and would be about people who cross the border between official ports of entry.

“This is a big-league statement, but we are going to do something very dramatic on the border,” Trump said, adding he was not closing the border.

Trump has made immigration a cornerstone of his presidency after promising on his election campaign trail to build a wall along the US border with Mexico. Under his “zero-tolerance” policy, the president has implemented several policies or practices that have been blocked by federal judges or are currently being challenged in the courts.

Arrests along the southern border have skyrocketed in recent months, with border agents making more than 100,000 arrests or denials of entry in March, a 12-year high.

On Thursday, NBC News reported that US border agents apprehended more than 1,000 migrants and refugees Wednesday morning on the border near El Paso, Texas.

According to NBC, the group of 1,036 people, was the largest ever encountered by the Border Patrol.

Baffled Danes mock Trump after he scraps trip over Greenland