The main challenger in Belarus’s disputed election called on President Alexander Lukashenko to give up power on Monday after a fierce police crackdown on protesters saw dozens wounded and hundreds detained.

Svetlana Tikhanovskaya, whose surprise candidacy is posing the biggest challenge to the veteran leader in years, said Sunday’s presidential vote had been rigged and accused authorities of resorting to force to hold on to power.

“The voters made their choice but the authorities did not hear us, they have broken with the people,” Tikhanovskaya told a press conference after police used stun grenades, water cannon and rubber bullets to disperse crowds in Minsk and other cities.

“The authorities should think about how to peacefully hand over power to us,” she said. “I consider myself the winner of this election.” 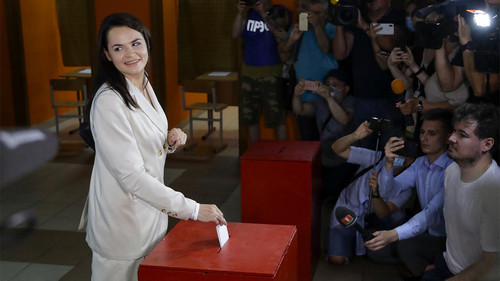 Election officials confirmed Lukashenko’s re-election to a sixth term on Monday morning, saying he had won with more than 80% of the vote, with Tikhanovskaya coming second with just under 10%.

The 65-year-old former collective farm boss has ruled ex-Soviet Belarus since 1994, stamping out dissent and earning the nickname of “Europe’s last dictator.”

European governments questioned the results of Sunday’s election, with the European Union calling for ballots to be “accurately” counted, Germany voicing “strong doubts” about the conduct of the vote and Belarus’s neighbor Poland calling for an emergency EU summit on the situation.

“The authorities have used force against their citizens, who are demanding change in the country. We must support the Belarusian people in their quest for freedom,” Polish Prime Minister Mateusz Morawiecki said in a statement.

Lukashenko was defiant, vowing he would not allow Belarus to be “torn apart” and denouncing the protesters as foreign pawns.

“We recorded calls from abroad. There were calls from Poland, Britain and the Czech Republic, they were directing our – forgive me – sheep,” Lukashenko told the head of an election observation delegation from ex-Soviet countries.

Tikhanovskaya, a 37-year-old stay-at-home mother and political novice, galvanized the opposition during the election campaign, attracting tens of thousands of supporters to the country’s biggest demonstrations in years.

Thousands took to the streets of Minsk and other cities on Sunday night to denounce the vote, sparking clashes with police saying they detained some 3,000 people, around 1,000 of them in Minsk.

The interior ministry said 50 civilians and 39 police officers were injured in clashes in the capital, accusing some protesters of sparking confrontations.

It said protesters in Minsk had lit flares, erected barricades, scattered nails and spikes on roads and thrown objects including paving stones at police.

“Some of the citizens taken to the country’s medical institutions were intoxicated,” the ministry said. “No military weapons were used against the perpetrators.”

‘Mockery of our people’

It said there were “no fatalities” in the unrest, but prominent rights group Viasna said one young male protester had died after suffering a traumatic head injury from being run over by a police vehicle.

The Belarusian Investigative Committee launched a criminal probe on charges of organising and participating in “mass unrest” – punishable by jail terms of eight to 15 years.

Alexander, a 35-year-old protester in Minsk, accused Lukashenko of blatantly rigging the vote.

“I came out to protest because the country needs a change in power,” he told AFP. “This is a crime, a mockery of our people.”

Tikhanovskaya decided to run for president after the authorities jailed her husband, popular blogger Sergei Tikhanovsky, and barred him from running.

On Sunday afternoon, huge queues formed outside polling stations in Minsk and other cities, after Tikhanovskaya urged her supporters to vote late to give authorities less chance to falsify the election.

Many wore white bracelets that have become a symbol of the opposition.

Tikhanovskaya had said that if she won she would release political prisoners and call fresh elections to include the entire opposition.

Lukashenko sought to boost his support by warning of outside threats and raising the spectre of violent mobs.

Authorities have detained 33 Russians, describing them as mercenaries sent to destabilize the vote.