Ecuadoreans face a runoff between a conservative businessman and a protégé of former leftist President Rafael Correa, while Peruvians have 18 options to pick from in the first round. All seats in Peru’s congress, too, are being contested.

The elections come amid a surge in COVID-19 cases in both countries and meager progress in their vaccination programs. Lockdowns have returned, threating further damage to the nations’ already battered economies.

In Ecuador, voters have been ordered to wear a mask, bring their own hand sanitizer and pencil, keep a 5-foot (1.5-meter) distance from others and avoid all personal contact in the polling place. The only time voters will be allowed to lower their mask will be during the identification process. 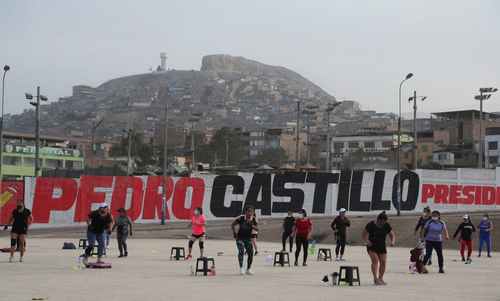 Election officials in Peru have scheduled specific times for people to vote to avoid overcrowding at the polls. People will have to wipe their shoes on sanitizing mats, wear masks, undergo a temperature check and carry their own blue-ink pen. Poll workers will be paid for the first time.

Ecuador’s runoff features leftist candidate Andres Arauz, who led the first round of voting with more than 30% on Feb. 7, and former banker Guillermo Lasso, who edged into the final by finishing about half of a percentage point above environmentalist and Indigenous candidate Yaku Pérez.

Arauz is backed by Correa, a major force in the troubled Andean nation despite a corruption conviction. He has proposed making the wealthy pay more taxes, backing away from agreements with the International Monetary Fund and finding legal mechanisms to force the repatriation of deposits that Ecuadorians have abroad.

Lasso finished second in the last two presidential contests. He favors free-market policies and Ecuador’s rapprochement with international organizations. He has proposed raising the minimum wage to $500, finding ways to include more youth and women in the labor market and eliminating tariffs for agricultural equipment.

The country is deep in a recession that many fear will worsen as lockdowns return because of a spike in COVID-19 cases. Ecuador has tallied more than 341,000 cases and over 17,000 deaths as of Friday.

Meanwhile, Peru’s election has turned into a popularity contest in which a candidate has even addressed how he suppresses his sexual desires. The crowded field of presidential hopefuls comes months after the country’s political chaos reached a new level in November, when three men were named presidents in a week after one was impeached by Congress over corruption allegations and protests forced his successor to resign.

All former Peruvian presidents who ruled since 1985 have been ensnared in corruption allegation, some imprisoned or arrested in their mansions. One died by suicide before police could arrest him.

To avoid a June runoff, a candidate needs more than 50% of votes, and recent polls show the leading candidate garnering only about 15% support.

The country is among those hardest hit by COVID-19, with more than 1.5 million cases and over 53,400 deaths as of Friday.