At least one protester has been killed and more than 100 arrested in clashes between police and demonstrators after the Belarus presidential election, which officials claim was won in a landslide by autocratic leader Alexander Lukashenko, according to a rights monitoring group.

Protests have sprung up in the capital Minsk ever since a state-run TV exit poll suggested the president had secured re-election and extended his 26-year rule in the Eastern European nation.

The official results announced on Monday claimed Mr Lukashenko won 80 per cent of the vote, while the main opposition candidate Svetlana Tikhanouskaya only secured 9.9 per cent.

Videos on social media have shown extensive violent clashes between protesters and the security forces, with tear gas, rubber bullets, flashbang grenades and water cannon used to try and disperse crowds of Belarusians angry at what they believe was another rigged vote. 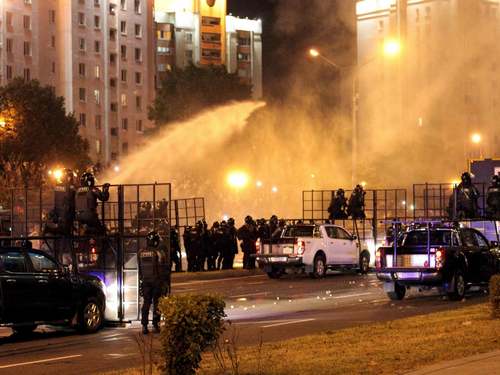 Valentin Stefanovic, from the human rights advocacy Spring 96, told the Reuters news agency one person had been killed after a police van rammed into a demonstrator in Minsk.

A video circulating on social media by protesters in Belarus appears to show the moment a vehicle, which cannot be clearly identified, runs over someone in the midst of tear gas explosions.

Mr Stefanovic also suggested about 120 people had been detained so far, according to his organisation’s initial data.

Pro-regime forces not wearing uniforms have also been filmed running into the crowds and beating people up, sometimes dragging them into unmarked vans before driving away.

Several journalists, including some reporting for Western outlets, have been attacked and detained.

Outside of the capital Minsk, protests have also broken out in cities including Brest, Gomel, Grodno and Vitebsk, where riot police have also tried to force people off the streets.