“Relatives and caring fellow citizens came out to the FSB building to protest the illegal searches and detentions,” Denisova wrote on Facebook on Saturday.

Ukraine has accused Russian security agents of detaining dozens of Crimean Tatars in what it called an ongoing crackdown on individuals who oppose Moscow’s annexation of Crimea.

“More than 50 Crimean Tatars were detained as a result,” she said. “They were pushed into buses, using brute force, hitting kidneys, and taken to various police stations… where they were questioned without lawyers’ access.” 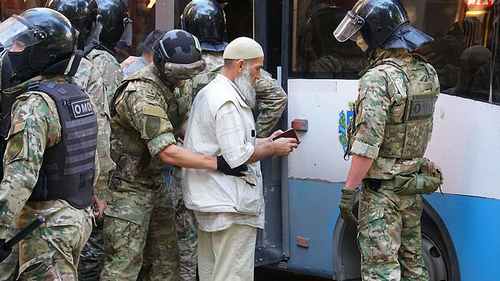 Moscow, which incurred Western economic sanctions after annexing Crimea from Ukraine and supporting pro-Russian separatists in eastern Ukraine in 2014, has not yet commented on the reported detentions.

The Crimean Tatars are a predominantly Muslim ethnic minority who say they face persecution from Russian authorities for largely opposing the Black Sea peninsula’s annexation.

Ukraine accuses Russia of carrying out political repressions against the Crimean Tatars. Russia denies the claim, but regularly publishes reports of arrests and criminal sentences against Islamist or pro-Ukrainian “terrorists” in Crimea.

On Monday, Denisova said that the five initially detained Crimean Tatars, including Nariman Dhezlal, deputy chairman of the Crimean Tatar Mejlis, will face charges of “sabotage” in court.

They face up to 12 years in prison if found guilty.

The Associated Press reported that Ukraine’s foreign ministry accused Russia of detaining the Crimean Tatars as “retribution for participation” in the inaugural international “Crimean Platform” summit last week. The event is aimed at ramping up pressure on Moscow over the annexation.

It described the detentions as “the latest in a series of repressions by Russia, aimed at intimidating representatives of the Crimean Tatar people and ousting them from the temporarily occupied peninsula.”