— President Joe Biden is extending a ban on housing foreclosures to June 30 to help homeowners struggling during the coronavirus pandemic. The moratorium on foreclosures of federally guaranteed mortgages had been set to expire March 31. Census Bureau figures show that almost 12% of homeowners with mortgages were late on their payments. The White House says the coordinated actions announced Tuesday by the Departments of Housing and Urban Development, Veterans Affairs and Agriculture also will extend to June 30 the enrollment window for borrowers who want to request pauses or reductions in mortgage payments.

— One year into the COVID-19 pandemic, millions of N95 masks are pouring out of U.S. factories and heading into storage. Yet there still aren’t nearly enough going to hospitals. An Associated Press investigation finds that this logistical breakdown is due to federal failures over the past year to coordinate supply chains. Internal emails also show there were deliberate decisions to withhold vital information about new mask manufacturers and availability. Exclusive trade data and interviews with manufacturers, hospital associations and frontline medical workers reveal a deadly disconnect — and not an actual shortage — that is depriving doctors, nurses, paramedics and other people risking exposure to COVID-19 of first-rate protection.

— Latinos are facing daunting barriers to getting COVID-19 vaccines, creating a risk for public health as the coronavirus mutates and spreads. Many are struggling with a lack of knowledge about the shots, state vaccine websites that don’t have Spanish instructions, ways to find appointments in their communities and fears they could be targeted for immigration enforcement. Ranging from elderly Cuban Americans in Florida to farmworkers in California, Latinos tend to have health problems like diabetes, obesity and hypertension. That makes them one of the groups at highest risk from COVID-19 in the U.S. 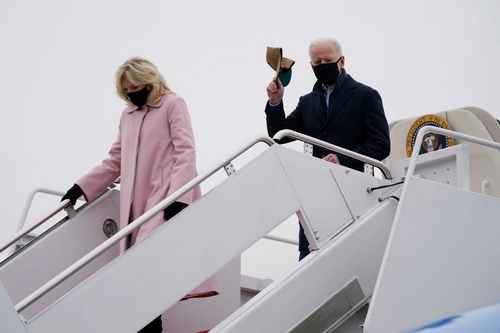 QUOTABLE: “Apparently, we are not front-line workers when it comes to getting the vaccine. That was kind of a shock,” said Dawn Hand, who works at a Kroger supermarket in Houston. She said three of her co-workers were out with the virus last week and she watches others getting vaccinated at the in-store pharmacy without knowing when she’ll get her turn.

ICYMI: Mardi Gras has arrived in New Orleans. But between cold weather and COVID-19, morning streets were nearly empty rather than jam-packed with picnickers and parade watchers. All parades are canceled and bars throughout the city have been closed since Friday. Even the city’s popular take-out drinks are forbidden. And officials put restrictions on crowds in the historic French Quarter, where Mardi Gras crowds are usually most crowded and rowdy. It was also freezing cold. Other Gulf Coast communities also have taken virus-related safety Mardi Gras measures. Mobile, Alabama, for instance, has canceled parades.

ON THE HORIZON: The snow, ice and bitter cold gripping Missouri has delayed people from coronavirus vaccinations, including those who signed up for mass inoculation events that had been scheduled for this week. The governor’s office said it was trying to reschedule the National Guard-run events, but that registrants should seek vaccinations elsewhere in the meantime. Gov. Mike Parson also said the conditions would likely delay some vaccine shipments. The cancellations follow a storm that dumped several inches of snow in much of the state and sent temperatures plunging below zero. Separately, the Shelby County Health Department in Memphis, Tennessee, also suspended COVID-19 vaccinations amid severe weather there. Vladimir Putin and the Myth that Just Won’t Die