Populist President Nayib Bukele appeared Monday to have won control of El Salvador’s unicameral congress, ending a two-year standoff with legislators of the old parties that have dominated politics in the Central American country since the end of the 1980-1992 civil war.

Bukele, 39, celebrated, writing, “Our people have waited 40 years for this.”

A preliminary count of about 80% of votes from Sunday’s elections showed Bukele’s New Ideas party and a coalition partner won several times as many votes as the established political parties, the conservative National Republican Alliance and the leftist Farabundo Marti Liberation Front. Exit polls suggested his party could win 53 of the 84 seats in the Legislative Assembly.

“His (Bukele’s) victory reflects how much anger most Salvadorans feel towards the country’s two discredited and moribund political parties, which had their chance to govern but failed,” wrote Michael Shifter, president of the Washington-based think tank Inter-American Dialogue.

Bukele has blamed congress for blocking his efforts in everything from controlling crime to managing the coronavirus pandemic. But he has also shown an authoritarian streak. Two years ago, Bukele sent heavily armed soldiers to surround the congress building during a standoff over security funding, earning rebukes internationally.

“Although Bukele is a legiitmate, democratically president with solid majority backing, his authoritarian tendencies and weakening of any checks on his power is of great concern,” Shifter wrote. “The story is not unique to El Salvador — Democratic elections have yielded antidemocratic leaders and governments, of the right and the left elsewhere in Latin America. Experience tells us that such stories often have unhappy endings.” 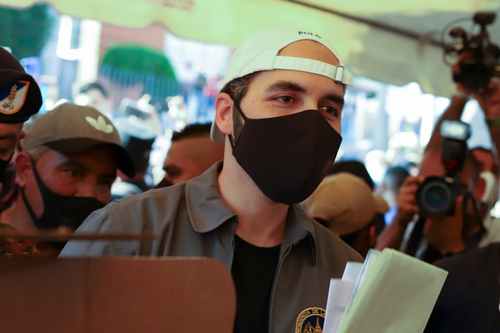 About 51% of El Salvador’s 5.3 million registered voters turned out for Sunday’s election, will which also decide 262 municipal councils.

“I’ve come to vote for a change, to get rid of the corrupt ones and so our president can make a new country,” said Estela Jiménez, who arrived early at a polling place wearing a T-shirt with an “N” for Nayib.

With a majority in the Legislative Assembly, Bukele’s party would not only be able to advance the president’s agenda, but also name justices to the Supreme Court — another Bukele obstacle — as well as magistrates to the Supreme Electoral Tribunal, the attorney general, the prosecutor for the defense of human rights and others. Essentially his party could replace his loudest critics.

Eduardo Escobar, executive director of the nongovernmental organization Citizen Action, said that if New Ideas wins a congressional majority, El Salvador would lose “that brake on the exercise of power from the legislature when legality or constitutionality is exceeded, (and) that brakes any attempted abuse, any arbitrary act that the executive wants to commit.”

“It would deepen the authoritarianism of the government Bukele leads,” Escobar said, though he acknowledged that Bukele’s popularity remains at stratospheric levels and the rejection of the traditional parties is nearly as high.

New Ideas’ popularity is because “in the 30 years of government under these parties, the people have not seen improvements in their lives,” said Escobar.

In statements before polls closed, Bukele upped the stakes by calling on those who hadn’t voted yet to participate in “Operation Remate,” literally, “Operation finish them off.”

“Ï like to call it ”Operation Remate,” the country has decided to end the postwar era, but there is more to do,” Bukele said. “Let’s make this an overwhelming victory.”

Because campaigning is supposed to be suspended before and on election day, the country’s Supreme Electoral Tribunal said it would open an investigation into Bukele for making political statements on Sunday.

The tribunal noted that president is supposed to avoid using his office to influence elections.