Hurricane Ida, the fifth-strongest to ever hit the mainland United States, has finally been downgraded to a tropical storm after spending 16 hours churning across Louisiana in what Joe Biden declared a “major disaster”.

Two people were confirmed dead in the storm’s aftermath, with the death toll expected to rise “considerably”.

Intensifying faster than experts had predicted, the weather system blasted into New Orleans exactly 16 years to the day after the devastating Hurricane Katrina, where it knocked power out across the city, tore off roofs and even reversed the flow of the Mississippi River.

Residents of the Gulf Coast evacuated their homes and businesses were shut down as much of the Louisiana coastline was plunged underwater. The hurricane claimed at least one life, after a tree fell onto a residential property in Baton Rouge.

Louisiana’s governor John Bel Edwards lamented that, “if you had to draw up the worst possible path for a hurricane in Louisiana, it would be something very, very close to what we’re seeing”, warning residents of his state to brace for potentially weeks of recovery. 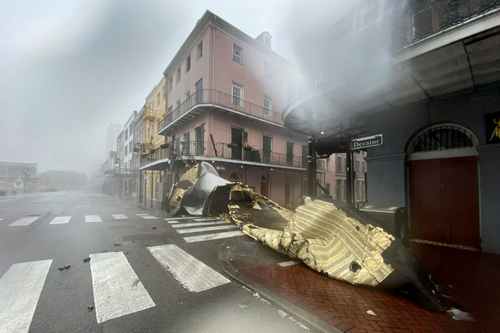 It was declared a tropical storm on Monday by the National Hurricane Centre, which warned that dangerous storm surges, damaging winds, and flash flooding would continue over portions of southeastern Louisiana and southern Mississippi.

Utilities companies are bringing in extra crews and equipment to deal with expected power losses from the storm.

Joe Biden said he has coordinated with electric utilities and 500 federal emergency response workers were in Texas and Louisiana to respond to Ida.

US energy companies have reduced offshore oil production by 91 per cent and gasoline refiners cut operations at Louisiana plants in the path of the storm. Regional fuel prices have risen in anticipation of production losses and on increased demand due to evacuations.

Coastal and inland oil refineries have also cut production due to the storm. Phillips 66 shut its Alliance plant on the coast in Belle Chasse, while Exxon Mobil Corp cut production at its Baton Rouge, Louisiana, refinery on Saturday.

Comparisons to the 29 August 2005 landfall of Hurricane Katrina have been weighing heavily on residents bracing for Ida.

A Category 3 storm, Katrina was blamed for 1,800 deaths as it demolished oceanfront homes in Mississippi and caused levee breaches and catastrophic flooding in New Orleans.

Both survived Katrina, and did not expect Ida to cause nearly as much destruction where they live, based on forecasts.

“Katrina was terrible. This ain’t gonna be nothing,” Alex Bennett said.

“I hate it for Louisiana, but I’m happy for us.”