The step, which had been signaled for months, was decried by Democrats and voting-rights advocates. The Democratic governor had vowed to veto similar bills pending in the GOP-controlled Legislature.

Secure MI Vote, which is being run by veteran GOP operatives, will need to collect roughly 340,000 valid voter signatures within six months of starting to circulate petitions.

The initiative would toughen a requirement that voters submit photo identification, eliminating an option that lets those without one submit an affidavit and vote. More than 11,400 of nearly 5.6 million voters did that in November.

Instead, people with no ID would get a provisional ballot and have to verify their identity within six days after the election for it to count.

The measure also would add an ID component to absentee ballot applications, requiring that voters submit their driver’s license number or the last four digits of their Social Security number. Nearly 3.3 million people, a record, voted absentee last November. Voters currently seeking an absentee ballot by mail must sign the application, and the signature is matched to the voter file. 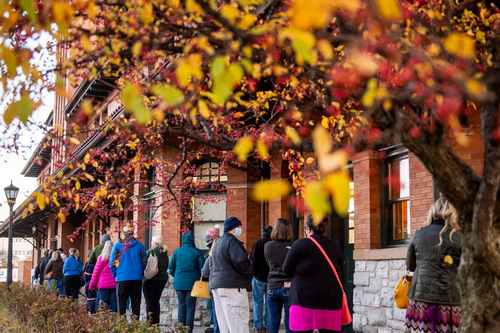 The initiative also would prohibit the secretary of state and local clerks from sending applications to people who did not request them and create a $3 million fund to ensure low-income residents have an ID. The funding also would make the measure referendum-proof under state law.

Jamie Roe, spokesman for Secure MI Vote, said voters “across the political spectrum” questioned the integrity of the 2016 and 2020 election results.

“The success of this initiative will make it easier to vote, harder to cheat, and restore confidence in the electoral system for Republicans, Democrats and independents alike,” he said in a statement.

The Michigan Democratic Party and other groups accused the GOP of trying to confuse voters and perpetuating Trump’s lies with the ballot drive.

“They want fewer people to vote because they just discovered what we have always known, when people vote, Democrats win. That is what this ballot proposal is all about, creating barriers to voting so fewer people have access to the polls,” said chair Lavora Barnes.

She noted that two-thirds of Michigan voters in 2018 passed a constitutional amendment expanding voting options.

Joe Biden won the battleground state by about 155,000 votes, or 2.8 percentage points, but former President Trump has falsely alleged widespread fraud. His own attorney general found no evidence of it in Michigan or other states. Trump’s allegations also have been dismissed by judges and refuted by state election officials, an arm of his own administration’s Homeland Security Department and Republicans in the Michigan Senate.

Several GOP states have tightened voting laws this year, and others are debating them. If enacted, the Michigan changes would be in place for the 2024 election but not the 2022 midterm because Democratic legislators would refuse to let them take effect immediately. How Russia Deals With the West After Navalny’s Jailing