Russia’s ambassador in the United States will depart Washington Saturday for urgent consultations in Moscow, the embassy said, warning that bilateral ties were on the brink of “collapse.”

Moscow’s strained relationship with Washington hit a new low Wednesday when Russia called back its ambassador over comments made by U.S. President Joe Biden who likened his Russian counterpart to a “killer.”

“On March 20, Ambassador of Russia to the United States Anatoly Antonov is leaving for Moscow for consultations,” the embassy said in a statement early Thursday.

Antonov planned to discuss “ways to rectify Russia-U.S. ties, which are in crisis,” it said.

It added that “certain ill-considered statements of high-ranking U.S. officials have put the already excessively confrontational relations under the threat of collapse.”

In an interview with ABC News, Biden was asked about a U.S. intelligence report that Russian President Vladimir Putin tried to harm his candidacy in the November 2020 election and promote that of Donald Trump.

“He will pay a price,” Biden said. 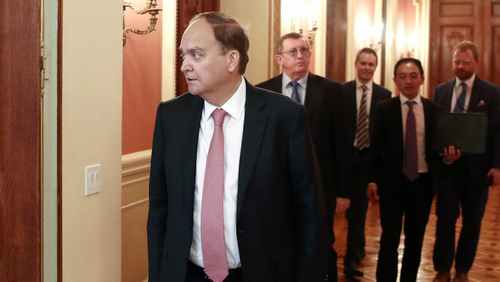 Asked if he thought Putin, who has been accused of ordering the poisoning of opposition figure Alexei Navalny and other rivals, is a “killer,” Biden said: “I do.”

The comments were aired as the U.S. Commerce Department announced it was toughening export restrictions imposed on Russia as punishment for jailed Kremlin critic Navalny’s poisoning.

On Thursday, Konstantin Kosachev, a deputy head at the Russian parliament’s upper house, said that Washington should apologize.

“Such statements are unacceptable in any circumstances and will inevitably sharply damage our bilateral ties,” he wrote on Facebook.

Moscow last recalled its U.S. envoy for consultations in 1998 over a Western bombing campaign in Iraq.

In 2014, during the fallout from Russia’s annexation of Crimea from Ukraine, Putin said that recalling a U.S. envoy would be “a measure of last resort.”