Sergio Mattarella, the president, asked Mr Draghi to be prime minister after party wrangling brought down the previous administration and, following a week of consultations, almost all the main parties from across the political spectrum have endorsed him.

The economist named a number of prominent figures from various Italian political groups as ministers to cement his support.

Luigi Di Maio, a leader of the 5-Star Movement, will remain as foreign minister, while Giancarlo Giorgetti, a senior figure in the League party, will be industry minister, and Andrea Orlando, from the centre-left Democratic Party, will be labour minister.

However, some key posts have been given to non-affiliated technocrats, such as Daniele Franco, director general of the Bank of Italy, who was named as economy minister and Roberto Cingolani, a physicist and IT expert, who was handed the role of minister for green transition.

The new government will be sworn in on Saturday, followed by votes of confidence in both houses of parliament, expected early next week.

Mr Draghi received a boost on Thursday when the largest group in parliament, the 5-Star Movement, agreed to support the government, meaning it would have a majority large enough to prevent any other party from bringing it down. 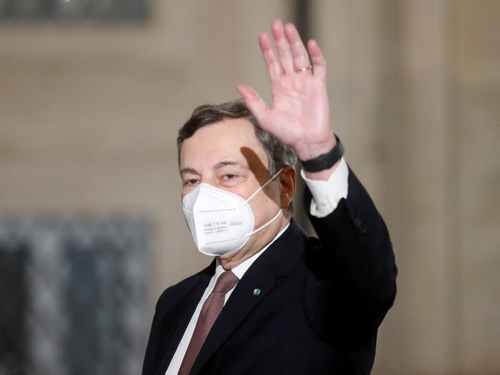 The 73-year-old, who is credited with having saved the euro during his time at the ECB, will be tasked with spending more than €200bn (£175bn) in European Union recovery funds to relaunch Italy’s economy, which has been badly damaged by coronavirus restrictions.

Politicians who met with Mr Draghi this week said he told them he was opposed to fiscal austerity, despite soaring national debt, due to the importance of protecting social cohesion, according to Reuters.

He has also honoured a pledge to create a new ministry for ecological transition, combining the environment and energy portfolios, in a move which helped to win the support of the 5-Star Movement.

Policies to fight climate change are required to be a pillar of the recovery plans to be presented by EU countries to the European Commission by April.