Massachusetts could become the latest state to pass a medical aid in dying bill this year after it successfully moved through committee in June.

The state legislature’s Committee on Public Health recently approved the End-of-Life Options Act, making it the first time the bill was voted favourably out of committee since it was first introduced in 2011.

Sources have indicated to The Independent that numbers look favourable that the bill could pass if brought to a vote. But it remained unclear if it would be brought to a vote this legislative session amid the coronavirus pandemic.

The bill, which was framed after similar ones like Oregon’s Death with Dignity Act, would allow for mentally capable, terminally ill patients who are expected to die within six months to end their life through a prescribed drug.

First the patient must gain approval from two state physicians before they are prescribed the drug. Multiple witnesses also need to be involved that are independent from the patient. Also, the patient is required to self-administer the medication without the help of others. 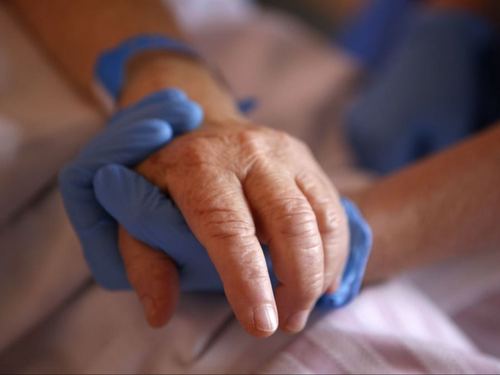 Massachusetts Senator William N Brownsberger, a co-sponsor of the bill, told The Independent he wanted to support it largely because of his father, a former psychiatrist who worked with elderly patients.

“My father’s argument, which I find persuasive, is that it’s actually very comforting for people who are heading into a terminal illness to know if they need to they can tap out. To know that if the pain gets too bad and there is no light at the end of the tunnel at all they can end it,” Mr Brownsberger said.

“Most people are not so afraid of dying, but they are afraid of suffering. Knowing that they have a way to avoid suffering is comforting,” he added.

The senator would not speculate on if the bill would make it to a vote this year, but he said the bill has done more favourably compared to previous years.

The Massachusetts Medical Society (MMS), the state chapter of the American Medical Association (AMA), went from opposing the bill to being neutral. About two-thirds of state doctors Supported the End-of-Life Options Act, according to a 2017 internal survey of MMS members.

“If we don’t get it done this year we have a good shot, a better shot, to getting it done next year. It is not a negative indicator that a bill doesn’t get done in a particular session,” Mr Brownsberger said.

What is medical aid in dying?

Medical aid in dying – which has also been referred to as physician-assisted suicide – in the United States allows for a terminally ill patient to end their life by taking a prescribed drug.

The lethal drugs must be prescribed by two doctors to a terminally ill patient with a six-month prognosis. Also, patients are required to be mentally and physically capable to self-administer the drug for themselves without the assistance of others.

Currently nine states and the District of Columbia have medical aid in dying laws that give their terminally ill residents the end-of-life option. No residents are allowed to utilise the bill if they are mentally disabled or have conditions that only limit their abilities.

Oregon was the first state to pass its Death with Dignity Act in 1997. California, Colorado, the District of Columbia, Hawaii, New Jersey, Maine, Vermont, and Washington all followed with their own bills. Montana allows medical aid in dying due to a state Supreme Court ruling in December 2009.

Passing these bills through the legislative process has largely been halted in all the states, besides Massachusetts, due to the coronavirus pandemic.

New York’s medical aid in dying bill had a shot of passing through the legislature, but the session has closed for the remainder of the year for everything but pandemic-related legislation. New York Governor Andrew Cuomo has previously indicated he would sign the bill if it were to reach his desk.

Passing these bills have been left up to the states largely due to the Supreme Court’s 1997 ruling in the landmark Washington v Glucksberg case. The Court stated that individual states could participate in an “earnest and profound debate about the morality, legality and practicality of” for medical aid in dying, leaving the decision ultimately up to state governments.

Who is Brittany Maynard?

Brittany Maynard was a 29-year-old California woman who publicly announced she intended to use Oregon’s end-of-life option in 2014 after being diagnosed with a likely stage 4 glioblastoma, the same brain cancer that later killed Senator John McCain.

She and her husband, Dan Diaz, moved to Oregon because California did not offer the end-of-life option at the time. After relocating, Ms Maynard was prescribed the lethal drug in May 2014 and died on 1 November of that same year after taking the medication.

“Today is the day I have chosen to pass away with dignity in the face of my terminal illness, this terrible brain cancer that has taken so much from me … but would have taken so much more,” she wrote in a Facebook post.

Following Ms Maynard’s death, her husband became an independent contractor for Compassion & Choices – a nonprofit organisation dedicated to providing end-of-life-options for Americans. Mr Diaz has since travelled around the US to speak with legislators about his wife and why he advocates for other states passing similar laws.

When Ms Maynard died, only four states had laws allowing end-of-life options for terminally ill patients like herself. That number has more than doubled with five more states and the District of Columbia passing laws.

“I feel just the sense of accomplishment,’ Mr Diaz told The Independent in regards to the passing of the bill in other states. “It’s how I honour Brittany’s legacy. It’s how I keep my promise to her and make a difference for the rest of us.”

Why is it called medical aid in dying?

Medical aid in dying was referred to physician-assisted suicide or euthensia prior to the passage of Oregon’s Death with Dignity Act in 1997.

Proponents of the law have since pushed for a change of terminology in an effort to provide neutrality when describing it. They’ve accused opponents being fear mongers for using terms like physician-assisted suicide or euthanasia in an effort to dissuade people from advocating for the law in other states.

The lethal dose must be prescribed by a doctor and taken by a terminally patient with a prognosis of six-months or less. No one is allowed to administer the drug for the patient nor is a patient who is not terminally ill allowed to utilise this end-of-life option, which is how it differs from euthanasia.

If a terminally ill patient decides to take the prescribed medication in a state where the law has passed, their terminal diagnosis is listed on their death certificate – like was the case for Ms Maynard.

“The underlying disease is what’s listed because it was a brain tumor that was ending her life,” Mr Diaz said about his wife.

In an effort to remain objective, The Independent has decided to refer to the process as medical aid in dying.