At least 12 people are injured after 21 vehicles were involved in a pile-up on an icy road on Saturday morning in Nashville, Tennessee.

The incident occurred on Interstate 24 close to Old Hickory Boulevard at around 8am, the Nashville Police Department said in a statement on Twitter.

Local fire officials confirmed that 12 people were taken to hospital due to injuries sustained in the crash. No fatalities have been reported.

Prior to the crash, the service urged drivers to “slow down and use extra caution when traveling,” as signs on the interstate warned: “Reduce speed, patches of ice possible, use caution.”

Traffic footage streamed online by the Tennessee Department of Transportation showed numerous cars piled up. Some 15 vehicles had to be removed by a wrecking crew, according to the Nashville Tennessean.

The 21 car pile-up caused the road to be closed for three hours. The interstate was not reopened until 11am after authorities had salted the icy highway. 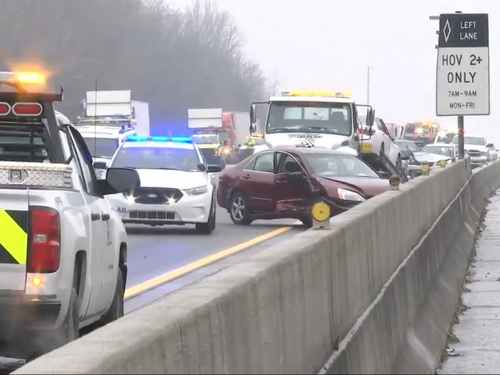 Claudia Arakas, who narrowly avoided the pile-up on Saturday, described the scenes on the interstate to the Tennessean, saying it was “insane” as her car “skated” in between the vehicles caught up in the crash.

She said that she had no control as she approached the initial affected cars. “I took my foot off the gas and tried to do my best to steer. I can’t even tell you how I managed to get out,” she said.

The incident came just two days after a deadly 100 vehicle pile-up on an icy road in Fort Worth, Texas, which killed at least six people and injured 36 others.

The pile up stretched 1.5 miles on Thursday morning, as authorities were still picking up pieces of debris at the end of the day.

Icy weather also caused accidents across north and central Texas on Friday, as 25 cars were involved in another pile-up in Austin and one motorist was killed in Dallas.