Russia’s Sputnik V and EpiVacCorona vaccinations for the coronavirus are not available or in short supply in 42 of the country’s regions, according to a report from the Peterburgskaya Politica think tank.

The main barriers to the start of the mass vaccination in the regions are shortage of supplies, lack of coordination between regional authorities and unequal access to the vaccine for local residents, the report said. It also highlighted the lack of aid for those receiving the jab and the potential threat of anger over mandatory vaccination for teachers, doctors and the military.

“The initial results of the vaccination process are contradictory,” the report concluded.

Head of the Higher School of Healthcare Organization and Management Guzel Ulumbekova told The Moscow Times that the goal set by the authorities of having 70% of Russians vaccinated by the end of 2021 is quite achievable but that there are certain logistical issues that could hamper the process.

“Sputnik V has very serious logistical challenges and there could be some issues with transportation, because it requires certain temperatures. The second vaccine, EpiVacCorona, is more convenient in this regard, It has standard transportation requirements,” Ulumbekova told The Moscow Times. 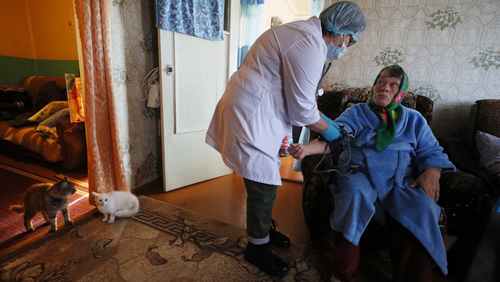 Head of medical research company Clinical Excellence Group Nikolai Kruchkov told The Moscow Times that on top of logistical issues, authorities also face production problems. He doubts that current production levels will allow the majority of Russians to get the anti-covid jab.

He added that “certain regional authorities, who have more political weight, can get supplies of the vaccine faster than others.

According to the Peterburgskaya Politica report, the vaccine is currently freely available only in Moscow, and the remote Sakhalin, Nenets and Chukotka regions.

President Vladimir Putin has instructed the government to start a mass vaccination programme next week. According to Deputy Prime Minister Tatyana Golikova, the authorities are ready to roll out the inoculation campaign on Jan. 18.