“The current president has cloaked American darkness for far too long. Too much anger. Too much fear. Too much division,” the former vice president said on the final night of the Democratic National Convention.”

“I give you my word, if you entrust me with the presidency, I will draw on the best, not the worst,” he said. “United we can and will overcome this season of darkness in America.

Then came a moment that, for now, is the biggest one in his five decades of public service.

“So it is with great honour and humility that I accept this nomination for president of the United States of America,” Mr Biden said.

Though he did not say Mr Trump’s name, he claimed the 45th chief executive “takes no responsibility … cosies up to dictators and fans the flames of … division.”

Mr Biden used his speech to paint the United States as at an “inflection point” of five crises, including the coronavirus pandemic, which he vowed to defeat, if elected.

“And after all this time, the president still doesn’t have a plan,” he said, promising a national mask mandate. “Well, I do. … We’ll build back better.” 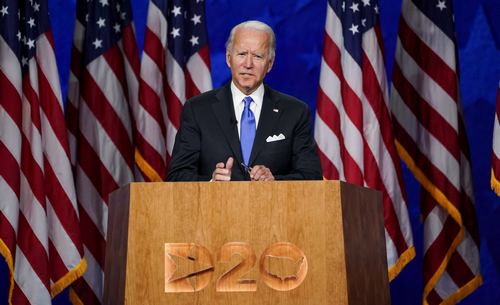 As expected, he also focused on losing a wife and child when he was a young man.

“I understand how hard it is to feel no hope,” he said. “You’ll always hear them.”

On policy specifics, Mr Biden said he would lower healthcare premiums and help with the country’s collective crushing amount of student debt. He promised an immigration system that “reflects our values,” and said he would bring “equal value” to women’s pay. Higher corporate taxes was another promise, as was protecting the “promise” of Social Security, saying “the current president is threatening to break that promise.”

“We can and will deal with climate change,” he said, but offering no policy prescriptions. He did not say how he would get any of those things done, especially if Republicans hold onto control of the Senate, which would allow Majority Leader Mitch McConnell to stifle any House-passed Biden administration priorities.

On racial and other matters of equality, Mr Biden said he could heal some of the country’s wounds – and said his running mate, California Senator Kamala Harris, of Jamaican and Indian descent, would be his partner in those and other efforts.

He took a major shot at Mr Trump by saying he would never stand for Russia taking out bounties on US troops in Afghanistan, something Mr Trump has never brought up with Russian President Vladimir Putin or acknowledged actually occurred despite several American intelligence agencies concluding just that.

Mr Trump, who will accept the GOP nomination next Thursday night from the White House, engaged his 2020 foe as he wrapped up his speech, saying the longtime Washington figure had nearly 50 years to address a list of problems but failed.

Mr Biden accepted his party’s nomination after several decades of trying to secure it. His 1998 campaign ended amid plagiarism charges and he never gained much traction in 2008, when Barack Obama shocked many by choosing him to be his running mate.

He then spent eight years as Mr Obama’s vice president, and was, according to the former commander in chief, almost always “the last person” to give advice before a big decision was made.

The longtime Delaware senator delivered the biggest speech of his political career during a convention forced to go virtual because of the still-spreading coronavirus. Unlike Mr Obama and every other Democratic Party nominee of the modern era, there was no crowd cheering obvious applause lines while waving signs with his name in giant block letters, there was no balloon drop, and he didn’t get that so familiar moment on stage with his family after wrapping his remarks.

But what he does have, according to multiple national and battleground state polls, is an inside shot to win the presidency.

He leads nationally by 7.6 percentage points, according to an average of a handful of surveys tabulated by RealClearPolitics, and in six key swing states by an average of 4.2 per cent. In Florida, which one GOP strategist recently said will make or bust Mr Trump’s re-election hopes, the former VP is up by 5 percentage points, according to RealClear. The organisation also has Mr Biden up in Michigan (6.7 per cent), Wisconsin (6.5 per cent), and Pennsylvania (5.7 per cent).

Political operatives from both parties say that collection of battlegrounds alone could decide who takes the Oath of Office on 20 January of next year.

Mr Biden spoke at the end of an emotional final night of the convention that featured a tribute to his late son, former Delaware state Attorney General Beau Biden. His other two children, Ashley Biden and Hunter Biden, delivered remarks introducing their father. And voters saw a video spelling out the tragedies that the former vice president experienced in his adult life, including burying a wife and two children.

Mr Biden’s complicated and gut-wrenching life story promises to be a big part of his campaign’s sales pitch, part of its effort to convince voters he has experienced the kinds of hardships that would allow him, if elected, to be an empathetic decision-maker.

Empathy is not Mr Trump’s strong suit, or something he really ever shows. Mr Biden echoed other Democratic speakers during the four-night event by casting the current president as inept and unfit for the office.

But hours before Mr Biden took the stage in Wilmington, Delaware, the campaigner in chief was trying out a new re-election sales pitch. He took Air Force One, in a move aimed at trolling his Scranton-born general election foe, to a rally outside the northeastern Pennsylvania town.

Unable to seek a second term boasting about a roaring economy and low unemployment, the president warned of a socialist takeover of the country and a “700 per cent increase” in refugees he suggested would be a drag on the country if Mr Biden wins in November.

The president called into a Fox News Channel program about a half hour after the convention broadcast began. He used the first half to try painting Mr Biden as too old to “fight back” against forces within his party that Mr Trump says has pulled him to the leftist fringe.

“Something’s going on. I assume we’ll be able to find out … sooner rather than later,” Mr Trump said without providing any medical professional’s assessment of the former VP. Moments later, a young boy speaking at the virtual convention told a moving talke of how Mr Biden, who stuttered as a child, helped him with his own stutter. He showed a copy of his Thursday night remarks that he had marked up to make it easier to read, just as Mr Biden taught him

Still, Mr Trump’s signature campaign-trail swagger appeared Thursday to be returning after appearing to have lost his fighter’s spirit for much of the summer, Mr Trump spoke of “anarchy in Portland” and the “bloody streets of Chicago,” saying if Democrats are given power, those things would be “coming to every town in America.”

Democrats, however, see different ills overtaking the United States if voters give the president four more years. They continued taking shots at the president, in between what felt like ill-suited jokes from comedienne and actress Julia Louis-Dreyfus, who played Vice President Selina Myer on the HBO series “Veep.”

“I’m urging you to vote against him because he’s done a bad job,” said former New York Mayor Michael Bloomberg, who briefly ran for the nomination this year. “New Yorkers recognise a con when they see one. … Why the hell would we ever rehire Trump for another four years?”

“Would you rehire someone who ran your company into the ground?” the wealthy businessman said. “Trump’s plan was to give a tax cut to guys like me, who didn’t need it. … ‘Joe will take away my tax cut.”

Mr Biden grew emotional during several parts of his speech, including a poignant one when he described watching Mr Trump say there were “very fine people, on both sides” of protests and counter-protests in Charlottesville, Virginia, that originated from a march organised by white supremacists.

The Democratic nominee called that “a wake up call for the country and for me,” he said. “At that moment, I knew I had to run.”