“Fitting in has never really been our thing,” says Pokey LaFarge, whose old-time music – a mix of Western Swing, pre-war folk, jazz and Dustbowl country – has always avoided the modern sounds of the mainstream. As a guest on Chris Shiflett’s Walking the Floor podcast, LaFarge talks about the childhood influences and late-teens wanderlust that led him to his music career. Along the way, the two talk about Jack White, street busking etiquette and all points in between.

As always, listen to the world premiere of the podcast below, using our rundown of highlights as a guide. 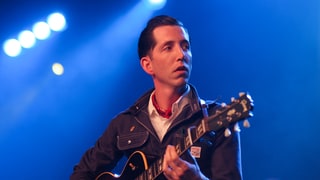 Even as a child, LaFarge was drawn to older music. Why? Because it sounded real.
As a teenager in Indiana, LaFarge would expand his CD collection with help from the local library, taking home 10 discs at a time and copying them on his family’s home computer. He went for the older stuff, from American folksingers to world musicians. Years later, he credits his “tendency to be attached to the more real aspects of life…when the music is represented in a raw, real true way” for influencing his tastes. “It’s just soul music,” he explains. “Somebody crying when they sing, and not being afraid to play a guitar out of tune. There’s mess-ups on the songs. All that stuff…it just feels real. That’s what’s always spoken to me.”

He credits the modern age – with its technology and oversaturated music industry – with allowing his throwback music to attract a crowd.
“The great thing about being around today,” LaFarge says, “is you really can do anything you want, and find an audience for it…I think there was a time, maybe the Nineties or early 2000s, where maybe it was expected to make more of a produced record. But now, you can do anything. Because people have that exposure to early music, there’s more context now, and maybe some of that stuff is in vogue – the older music.”

He’s a veteran street busker.
“I’m a firm believer you can make money doing anything,” says LaFarge, who funded his earliest tours by busking in the cities’ public places. He gradually grew crowds in each city, and retained those fans when he made the jump to brick-and-mortar venues. The number-one rule for busking? Bait the case. “Put some ones in there,” LaFarge recommends, advising any aspiring buskers to fill their guitar cases – or any other money receptacle – with a few dollar bills before beginning.

Working with Jack White, who runs Third Man Records, was downright inspiring.
“Jack’s very hands on,” says LaFarge, after releasing his 2013 album through White’s Nashville-based label, Third Man. “I think he likes it that way. He has a strong presence. He has a lot of ideas. He has a strong brand, and he carries that to everything he does.”

Based in St. Louis for a number of years, LaFarge has begun grounding himself in a single city for the first time since his childhood.
Last year, LaFarge’s band took a break from the road, capping their touring schedule at 60 shows. “It’s a third of what we had been doing for the last several years,” the frontman notes. The reason? The guys wanted to make an album at home. “On Cherokee street, where we live, there’s a studio called Native Studio,” LaFarge adds. “We’ve come friends with them and we love what they’re doing there. We felt strongly about not only working with them but making a record in our hometown, but helping the studio and being home and being able to go home to your own bed at night, as opposed to going back to a hotel room, which just feels like you’re on tour.” The result is Manic Revelations, which arrived on May 19th.

When you begin your music career on the streets – literally – it becomes quite easy to chart your progress.
“We’re playing the Fillmore in a couple days,” LaFarge tells Shiflett. “When I first came to San Francisco, I was busking on the street and sleeping in the van. We’re pretty lucky.”