Kim Jong-nam, the dictator’s half brother, is seen sprawled on a stretcher as paramedics try desperately to save his life moments after two women smeared VX nerve agent on his face.

Two women are on trial accused of attacking Kim Jong-un’s estranged relative with the deadly nerve agent VX at Kuala Lumpur airport on February 13 in an assassination that shocked the world.

Indonesian Siti Aisyah and Vietnamese Doan Thi Huong, who wore a LOL t-shirt at the time of Nam’s death, have pleaded not guilty to the murder. 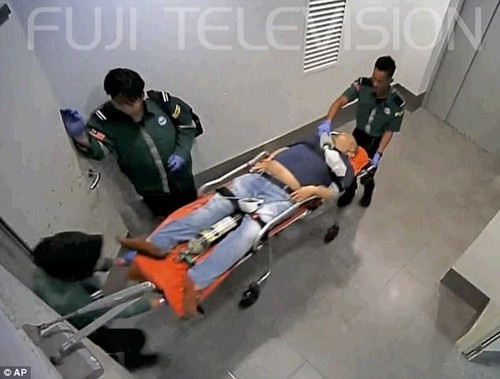 Kim Jong-nam, the dictator’s half brother, is seen sprawled on a stretcher as paramedics try desperately to save his life moments after two women smeared VX nerve agent on his face 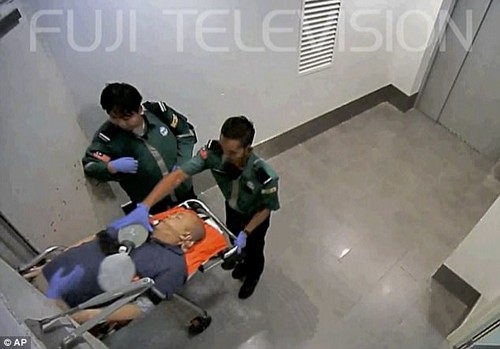 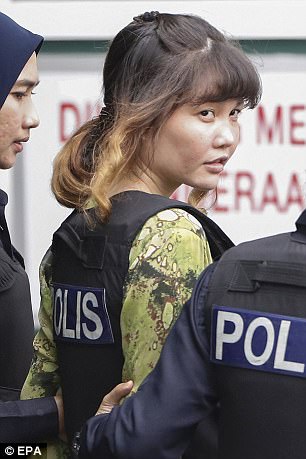 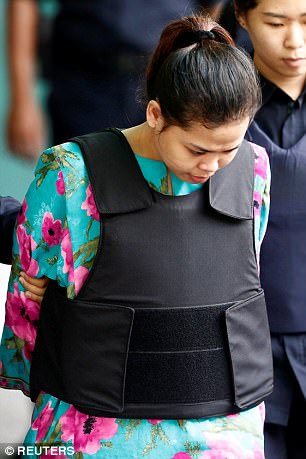 Indonesian Siti Aisyah (right) and Vietnamese Doan Thi Huong (left), who wore a LOL t-shirt at the time of Nam’s death, have pleaded not guilty to the murder 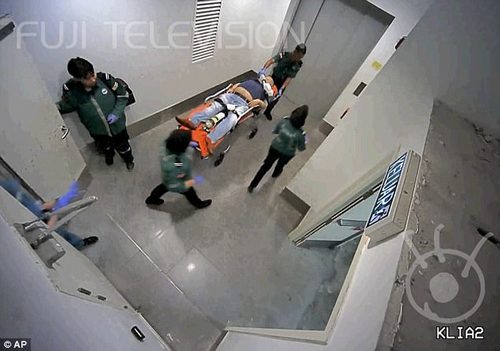 Wearing loafers, light jeans and a navy t-shirt, the dictator’s half-brother can be seen on the stretcher

The trial moved Monday to a high-security Malaysian laboratory to view clothing worn by the defendants – including the LOL shirt – and contaminated by the nerve agent.

The visit to the government lab near Kuala Lumpur came after a chemist last week testified there were traces of VX on the women’s clothes.

Raja Subramaniam’s testimony was the first evidence directly linking the women to the poison used to kill Kim Jong-Nam as he waited at a crowded airport near the capital.

The women, who were arrested a few days after the killing and face death by hanging if convicted, have pleaded not guilty to murdering the estranged half-brother of Kim Jong-Un as he waited to board a flight to Macau. 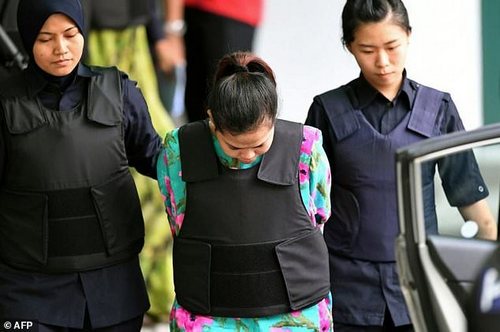 Vietnamese defendant Doan Thi Huong is escorted by police personnel following her arrival at the Malaysian Chemistry Department in Petaling Jaya, outside Kuala Lumpur on October 9

On February 13, Kim Jong-nam was killed by two women who smeared him with VX nerve agent in Kuala Lampur International Airport in Malaysia. He was 45 years old

The defendants say they were duped into believing they were taking part in a prank for a reality TV show, and their lawyers blame North Korean agents for the assassination.

On Monday the judge, prosecutors and defence lawyers headed to the laboratory along with Raja.

‘The whole process was to identify the exhibits,’ Gooi said.

But he added that a blazer said in court to have been worn by Kim Jong-Nam and to be contaminated with VX was not shown to them.

The trial was supposed to move back to Shah Alam High Court, near the capital, and resume in the afternoon. But it was postponed until Tuesday after Raja, who was due to be questioned by the defence, complained of feeling tired.

The murder sparked a fierce row between Malaysia and North Korea, which is suspected of ordering the hit. Pyongyang denies the allegation.

‘Man up!’: Britons react to ‘Beast from the East’ weather storm hitting the UK