On a radio phone-in yesterday evening, Theresa May was asked which member of her Cabinet she would choose to accompany her on a desert island.

Most LBC listeners probably presumed that Mrs May would dodge this loincloth-and-hammocks question – shades of Oliver Reed and Amanda Donohoe in the 1986 film Castaway.

Theresa May, on a phone in on LBC this afternoon, refused to say if she would vote Leave or Remain if the Brexit referendum was re-run

But she went ahead and answered it, saying her preferred companion would be the dashing doctor, International Trade Secretary Liam Fox.

After all, she explained, as a quack he might be able to give her practical help on how to recover from the recent heavy cold which scuppered her conference speech.

Lucky old Liam. If I were him, I’d start learning how to build a raft out of coconut shells.

Phone-ins are notoriously tricky territory for politicians but Mrs May survived her encounter with LBC’s Iain Dale, who had put on a smart coat and tie for the occasion.

The trickiest moment for her was when Andy from Newcastle asked if she didn’t think it was better she quit now to avoid a ‘guaranteed Corbyn win’ in the next election.

Mrs May replied with the Mandelsonian line ‘I am not a quitter’. 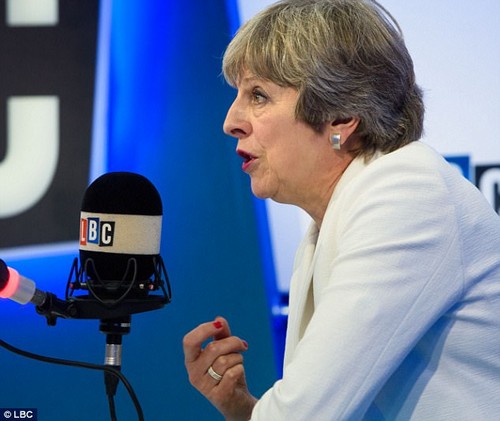 Then came Brexit. Would she, a former Remainer, vote differently if given another chance. After initial scoffing at this ‘hypothetical scenario’ she said with gusto: ‘We’re not going to have another referendum and that’s that!’

And she reeled off the date – March 19, 2019 – when we will leave the EU. It was almost as if the day was seared on her mind. Ringed in her diary. The day after which she will be able to quit in honour, perhaps.

Radio these days is not as invisible as it was. Studio cameras beam the session live via the internet.

We could therefore see her grimace and throw wide her hands when she recalled the moment in her Tory conference speech last week when a stranger suddenly approached her.

Dale wondered if at any point she had suspected she might be in danger. No, said the Prime Minister, ‘I thought I’d just carry on’. 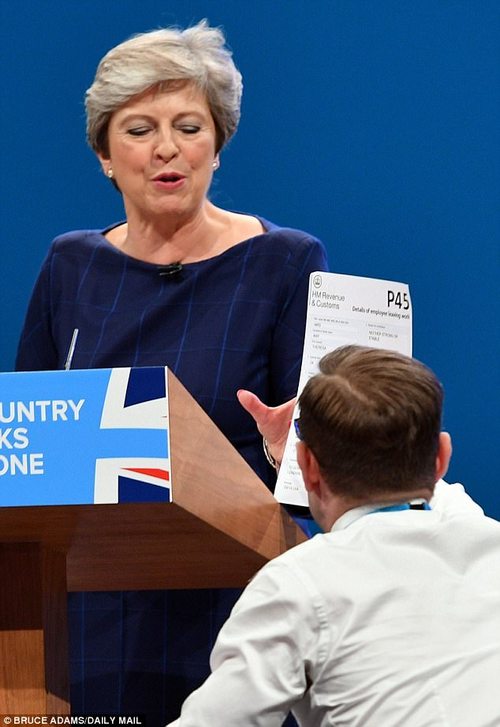 She disclosed that her husband Philip had been a rather more concerned than she had about her physical safety, although in the event the man turned out to be simply a prankster who handed her a fake P45.

When she recalled the hug Philip had given her after the speech, she looked rather touchingly proud.

Interviewer Dale mentioned ‘Freddy the frog’ – i.e. the appalling attack of the gargles that suddenly afflicted Mrs May, whose speech turned into a Vicks advert-style succession of coughs and splutters.

‘Freddy the frog and all his friends and relations, I think,’ laughed Mrs May.

‘Did you think, “no, I’m going to have to stop”?’ asked Dale. Mrs May: ‘There was a lot I wanted to say about housing, student finance, the energy price cap, mental health and the overall thrust of the sort of Government I want to be.’

‘I the Government’? Now it was our turn to cough, perhaps.

A 17-year-old Tory member, Callum, said he liked the Labour policy of scrapping college fees. Mrs May stuck to her belief that it was not fair for non-student taxpayers to subsidise the career-boosting university years of future graduates.

There was some worthy stuff about race discrimination which may not have done much for LBC’s ratings but moored Mrs May in the Blairite centre ground (that could be shrewd electorally).

A caller by the name of Mike mentioned George Osborne, the former Chancellor who has become a newspaper editor and has gone bonkers about attacking Mrs May and Brexit. ‘He’s chosen to adopt a new career,’ observed Mrs May. ‘We believe in a free press.’ I swear her smile creaked.

When had she last spoken to Mr Osborne? This was the one moment she looked a little flustered. ‘I honestly can’t remember,’ she said with a little glance to the ceiling. 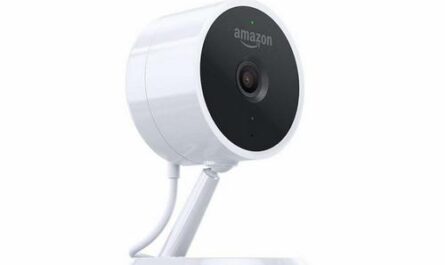