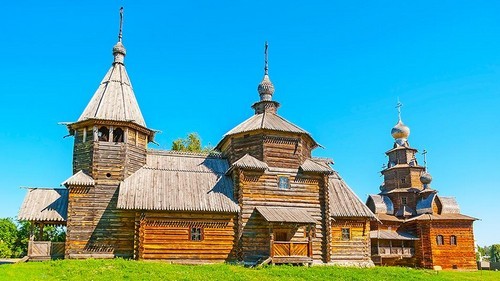 Artistic Retreat on a Beautiful Estate

Abramtsevo Estate, just 60 kilometers from Moscow, has a long and eventful history. It started out as the center for the Slavophile movement in the early 19th century. Under the leadership of Sergei Aksakov, the estate was frequented by the likes of Nikolai Gogol and Ivan Turgenev. Aft er Aksakov’s death Abramtsevo was bought by industrialist Savva Morozov, another known patron of the arts, who brought together the greatest minds of his time at the estate. Among the well-known artists who spent time and worked at Abramtsevo were painters Valentin Serov, Ilya Repin, Isaac Levitan, Viktor Vasnetsov and Mikhail Vrubel.

With an 800-ruble ticket you can view these artists’ works and visit the onsite buildings, which contain more paintings and historical items. Don’t miss a small church designed by Viktor Vasnetsov and a tiled majolica bench made by Mikhail Vrubel. At the entrance to the estate there are stands with traditional Russian baked goods and soft drinks. Alternatively, stop at café Abramtsevo for a light bite or head to the slightly pricier restaurant at Galereya hotel. Take the train from Yaroslavsky Station to Khotkovo, and then bus No. 55. 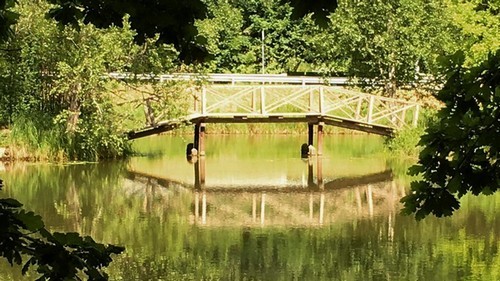 The main attraction of Sergiyev Posad, a small town about 70 kilometers north of Moscow, is the Trinity Lavra of St. Sergius, a UNESCO World Heritage Site. The monastery was founded by Sergius of Radonezh, one of the most revered 14th century Russian saints. The architecture of the monastery is simply unbelievable – you’ll find your head constantly turning from one marvel to the next. The masterpieces not to miss are the Trinity Cathedral, which houses Andrei Rublyov’s icon “The Trinity,” the Assumption Cathedral and the refectory building built in the Baroque style. Both St. Sergius himself and Tsar Boris Godunov are buried on the site.

You are allowed inside the churches during services but be sure to respect the monastery’s dress code. Women are advised to bring a scarf to cover their hair and modest clothing for all visitors is a must. Near the monastery there is a picturesque park where you can rent a boat and relax after all that architectural splendor. If you’re looking for a pit stop, there’s a great little place with burgers, cider and craft beer called Bar Svoi on the way from the monastery to the train station – perfect if you have a little while to wait for your train.

Take the train from Yaroslavsky Station direct to Sergiyev Posad. Trains leave every 20-30 minutes and take about an hour and a half. The last train back departs just before midnight. 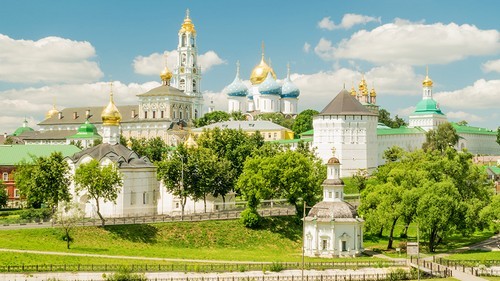 175 kilometers to the northeast of Moscow, Vladimir was already known as a heavyweight political, religious and cultural destination while Moscow was still in its provincial youth. The city’s golden age was during the 12th century, when Prince Andrei Bogolyubsky moved the capital to the city from Kiev and built many of Vladimir’s most well-known landmarks.

Take the express train from Kurskaya Station (the journey takes around three hours) and don’t be put off by the rather dour Soviet infrastructure you’ll be greeted with upon leaving the train. If you head into town you’ll soon see what everyone is talking about. First stop is the Cathedral of St. Demetrius, which bears intricate stone carvings depicting King David, wild beasts and the Kievan Prince Vsevolod III.

Walk past the Palaty, an 18th century court building that holds a children’s museum, exhibition and art gallery, toward the fairytale golden domes of Assumption Cathedral. After gawking at the Byzantine-inspired exterior, head inside for frescoes by Rublyov and the coffin of Alexander Nevsky of Novgorod. Ghoulish types will get a thrill from the glass coffin through which you can see his withered, mummified hand. A word of warning: Take no notice of the signs and instead inquire with the babushka at the desk as to when you can expect the churches to open their doors. 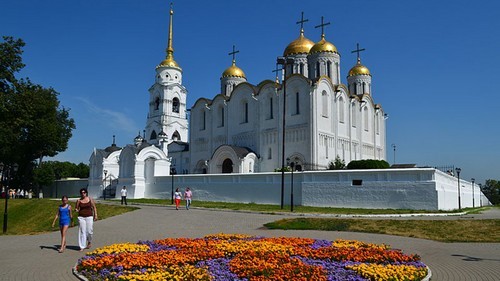 If you’ve made it as far as Vladimir it would be a shame not to hop on a bus and make the 40-minute journey to Suzdal, rightfully referred to as the diamond of the Golden Ring. If you’re looking for rustic charm, more wooden carvings than your Instagram account can cope with, and a remarkable ratio of churches to human beings, Suzdal is the place for you.

Start your explorations at the Suzdal Kremlin, home to the beautiful blue-domed Nativity of the Virgin Cathedral, a museum, a few streets of houses and several smaller churches. Leaving the Kremlin, take the bridge across the river to the Museum of Wooden Architecture and Peasant Life. It’s more about the former than the latter, but the picturesque Church of the Transfiguration from 1756, a café serving medovukha (a honey based drink) and the old mills make it a lovely place to while away an hour or two.

Further north is Suzdal’s biggest monastery, Saint Euthymius. The complex features buildings and churches funded by Ivan the Terrible and the wealthy Pozharsky family. There is no shortage of guest houses and restaurants, so if making the journey back to Moscow doesn’t seem like an attractive option, spend the night and have dinner and a few glasses of Georgian wine on the terrace at Gostiny Dvor.

There are no direct trains from Moscow to Suzdal, it is necessary to go to Vladimir first and then travel on from there. Take the express train from Kurskaya Station to Vladimir. Cross the road to the bus station and buy a ticket to Suzdal. Buses depart every 30 minutes. Many visitors choose to make a weekend out of seeing Vladimir and Suzdal.