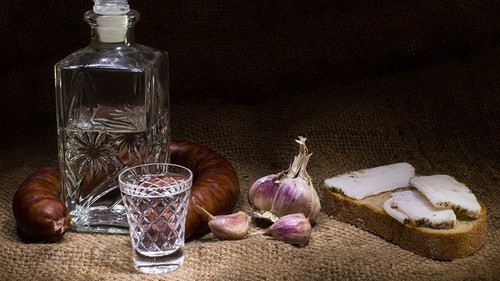 In Russia, almost every day is a holiday. In addition to public holidays such as Victory Day and New Year’s Day, Russians also annually celebrate over 400 professional holidays.

There is even a day in January dedicated to vodka – the official Birthday of Russian Vodka, the day on which Dmitry Mendeleyev defended his doctoral dissertation “On Combining Water and Alcohol” in 1865. In his dissertation, he continued his exploration of chemistry, a study that would see Mendeleyev four years later publish his groundbreaking Periodic Table.

The Periodic Table established Mendeleyev as one of the leading scientists of his age, and honors were heaped upon him. He served the Imperial Government as Director of the Bureau of Weights and Measures, and it was this job that got Mendeleyev into the vodka business. Legend has it that in 1894, Tsar Nicholas II ordered Mendeleyev to create a standard recipe for Russian vodka. Mendeleyev supposedly simply rounded up his dissertation number of 38 percent alcohol to a more marketable 40 percent (80 proof), the number still in use today.

Mendeleyev’s actual participation in the vodka recipe was probably far more minor than the legend purports, but the marketing people are still using it to great effect in the brand building of modern labels such as Russian Standard. Russian vodka, of course, dates much further back than 1894, though not, perhaps, as far as we might imagine, just as vodka is not as Russian as we might think. Poles were distilling grain and potato spirits as early as the eighth century, but Russians encountered distilled spirits only in the late 14th century, when Genoese merchants passed through Muscovy en route to Lithuania with a fiery grappa-like liquor they called “aqua vitae.”

Historians recount that the Muscovites didn’t think much of it. Aqua vitae, they agreed, might make a good medicine – topical or internal – if one were truly ill, but for drinking, they preferred their own, more labor-intensive homebrewed mead and beer.

It would take another century before monks in the Chudov Monastery in the Kremlin began to master the art of distilling grain alcohol. They found a savvy patron in Tsar Ivan III, who recognized in vodka a partial solution to his need to fill the national coffers. He instituted the first state monopoly on vodka in 1472, inaugurating a 500-year tug-of-war between the state and its thirsty citizens over vodka’s price, quality, quantity, access and distribution.

High vodka prices and restrictions on access to it often led to civil unrest in the uneasy 16th-century Time of Troubles. Russian nobles were granted the right to distill their own vodka on their estates by Catherine the Great, a nice perk they enjoyed for over 100 years, until the Abolition of Serfdom in 1861 paved the way for more commercially-minded vodka merchants such as Pyotr Smirnoff, who focused on making a purer version of vodka in safer working conditions, mindful of the concern that home-brew was known as a leading cause of illness and death among the lower classes. This is the era of Mendeleyev and his legendary 40 percent.

When revolution came in 1917, it did little to curb the national thirst for vodka. Production, distribution and sales were nationalized by the government. Vodka remained the cornerstone of every hatching, matching or dispatching, and all the celebration in between. And so it is today!

Jennifer Eremeeva is a longtime expat who writes about food, cuisine, history and travel. Follow her on Twitter  @JWEremeeva.