An employee of the Meshalkin clinic accused the management of a bias. Olga Masalova has been working at Meshalkin’s clinic for over five years. All this time, the management had no complaints about her. But in recent months, a woman has had two reprimands at once.

In February last year, several employees of the Meshalkin clinic came to the management with a request to raise salaries. Among them was a nurse-anesthetist Olga Masalova. It was not possible to agree with the authorities, so the doctors sent an appeal with a similar request to the presidential administration. Since then, the situation has changed little: the salaries of medical workers remained at the same level, but the bosses had questions to the initiative subordinates.

Olga Masalova believes that it is because of this that she fell into disgrace – in recent months she has already had two reprimands. After the third, the woman faces dismissal. However, the management of the Meshalkin clinic has its own version of what is happening.

“They asked why we have such small salaries”

Olga Masalova has been working in the Meshalkin clinic as a nurse – anesthesiologist in the department of anesthesiology of the intensive care unit since 2015. In February 2020, she, along with several colleagues, came to the new director, Alexander Chernyavsky, to talk about small salaries.

– There were five of us. At first we did everything normally – we went to the new director Chernyavsky, there was Pukhalsky (deputy director for economics and development of the Meshalkin clinic). We informed them orally. They asked why we have such small salaries, – recalls Olga Masalova. 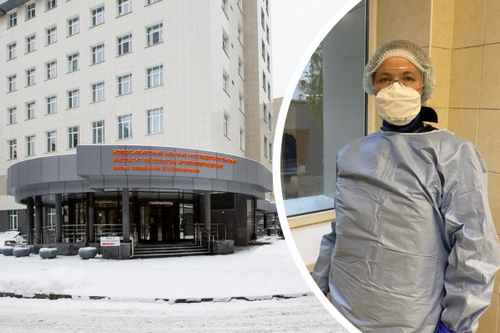 Now, according to her, the average daily salary of a nurse is 1,440 rubles. The monthly income ranges from 31 to 35 thousand rubles. Olga Masalova says that under the previous director, the level of salaries was higher. And now plans have increased, there are more patients, surgeries have risen in price, but this has not been reflected in the income level of ordinary employees.

– At the meeting, the leadership was more or less negative. They say that you are making some demands here. They took our receipts, printouts, and said that everything was fine with us. We then waited and waited, but nothing changed. The awards were incomprehensibly distributed; they made some kind of point system in the X-ray operating room. I went up to the manager and asked why I have such an award and so many points. They answer me that I have no overwork. Why should I have processing in the X-ray operating room? We have a set rate of working hours. Everything is somehow opaque, they don’t allow us to sign [documents], how many awards we have, ”says Olga Masalova.

Since there was no reaction from the management, and dissatisfaction with the salaries remained, the clinic staff decided to send a letter to the president. The appeal was prepared by several people, but only Olga Masalova left her contact details in it – the letter was sent on her behalf.

The Ministry of Health replied instead of the president

In November 2020, Olga Masalova received a detailed response from the financial and economic department of the Ministry of Health of the Russian Federation, the essence of which was all the same: there is no reason to raise wages.

After the doctors sent a letter to the president, Olga Masalova unexpectedly received a note from the clinic’s management, demanding to explain to the authorities about the omissions.

– When the first wave of the coronavirus epidemic began, the older sister and the manager told us: as soon as the operation ends, leave work so that there is no crowd. And we left. But specifically, they took ACS from me (a card system for monitoring and controlling access, with which you can enter and leave the premises. – Approx. Auth. ) And decided that I was not working out enough. If you take the ACS of all employees, it turns out that everyone left early. But for some reason these claims only touched me, – the nurse is perplexed and worried.

Olga wrote an explanatory note. A month and a half later, she received a disciplinary action document. Then they again demanded an explanatory letter from her – now for the fact that she had been absent from the operating room for half an hour during the operation. Olga explained that she had a stomach ache. Before leaving, she took time off from her immediate supervisor and was replaced by a colleague:

– My dad was in serious condition, and they chased me into the operating room – let’s sign the acts. Then, three days later, my dad died, I asked to let me go for the weekend – they did not give me, they said to take time off. I sent an appeal twice that it is illegal. As a result, at the end of the year I was given financial assistance. They paid me three days as a vacation. Then the penalty was calculated and paid. Then I got sick. After – another complaint. Found a covid patient in the clinic where I got infected. And they send me to the Investigative Committee that I disseminated this information (meaning that Olga allegedly told someone that the patient was infected with coronavirus in the hospital. – Author’s note ).

Back in September, the nurse recalls, there was a case at the clinic when a patient with coronavirus was brought. Then the anesthetists complained that someone “opened all the suits and took the eyeglasses” – the brigade had nothing to work in.

The Investigative Committee, says Olga Masalova, did not initiate a criminal case, since there was no evidence that she had provided information about an infected patient to someone.

Now the nurse is worried that after the third reprimand she will be fired. She decided to turn to lawyers to write a pre-trial claim. This, according to Olga, did not help: the management, instead of answering, once again demanded that she write an explanatory note about the missing ampoule with a certain “narcotic drug.” The woman claims that she has no idea what ampoule is in question, and does not remember all the circumstances of the work that day – more than two months have passed since then.

“Their very actions are forcing me to leave. They scribble some complaints one by one. They understand that it is difficult to fire me as a mother of many children, and now they are digging under criminal responsibility, – Olga Masalova believes. – Someone would have given up and left, but I have three children.

The nurse turned to the prosecutor’s office, where they promised to help her.

What they say in the Meshalkin clinic

The clinic explained that the salaries of medical personnel were increased in 2019 and 2020 in connection with presidential decree No. 597. And they referred to a letter from the Ministry of Economic Development of the Russian Federation, which determined the average monthly income of employees of organizations subordinate to the Ministry of Health. Specifically in the Novosibirsk region, the average salary of such workers is now 35 thousand rubles.

– The average salary of a nurse – anesthetist of the department of anesthesiology and intensive care in 2020 amounted to 53,420 rubles, which is almost 153% of the average salary in the Novosibirsk region and higher than the figure determined by decree No. 597, – they say in the clinic.

And the official salaries of workers here, as follows from the answer, are increased annually. At the same time, salaries are increased taking into account the limits of funds that have been allocated for wages in a specific financial year:

According to the press service of the clinic, the work schedule of the nurse-anesthetist of the intensive care unit of anesthesiology is “a working week with the provision of days off on a sliding schedule on the basis of summarized recording of working hours.” Labor is paid for the hours actually worked – by the hour. But not without incentive payments.

The clinic reiterated that there are no grounds for changing wages now. According to them, payments to medical staff could decrease, because four new angiographic complexes appeared in the X-ray operating room – two operating rooms were taken out of operation. Meanwhile, due to the coronavirus infection, the workload on other operating rooms has decreased.

– The number of diagnostic and therapeutic interventions under X-ray control in 2020 compared to 2019 decreased by more than 10%. Accordingly, payments for the volume of work have decreased proportionally, – they say in the clinic.

In 2020, the medical workers of the Meshalkin clinic were allocated bonuses to reach the average cost of an hour of work for anesthesia nurses in the anesthesiology-intensive care unit at a level just above 2019.

Since the clinic was not re-profiled to work with covid and did not provide services related to its treatment, no additional payments were made to doctors.

The Meshalkin National Medical Research Center denied the information that the institution had filed an application with the Investigative Committee “on the disclosure of medical secrets by any of the employees.” But they added that a disciplinary check is still underway.

– A disciplinary check is underway in relation to one of the workers from among the nursing staff on the fact of unfair implementation of the norms of the current legislation on narcotic drugs and psychotropic substances, the requirements of local regulations, job descriptions, as well as non-compliance with medical prescriptions of a doctor and unclear medical records in accordance with established requirements.

On Monday, March 1, the labor inspection came to Meshalkin’s clinic. Experts, according to the management of the medical institution, did not find violations related to the payment of salaries.

A few days ago, an article about an elderly Siberian woman who was offended by the rewarding of medical workers was published at the NGS. 73-year-old resident of Novosibirsk Tamara Golovkina worked for 55 years as a procedural nurse and at the ceremony of awarding former employees of polyclinic No. 18 received only a certificate of honor and a chrysanthemum.