The accident happened near the village of Chik: an Isuzu truck collided with a truck – at the time of death, the Isuzu driver was 39 years old.

According to the official version, the Scania truck crashed into the separator and was already standing when Isuzu drove into it. The relatives of the deceased are sure that she was still moving. Now they expect to find video from recorders to confirm their guesses and deny that the victim exceeded the speed limit.

As the wife of the deceased Yuri Dolgov, Tatyana, told the NGS correspondent, on the day of his death, he was transporting cargo from Omsk, where his family lives, to Krasnoyarsk.

– My husband has been working in this company for a very long time, and he has been driving for 20 years. Accident-free. Why was there such a shock for everyone and still no one can believe it? Because he is a very attentive driver. There, many tried to write on social networks that the speed was exceeded, but this is not the case. He knew perfectly well what meteorological conditions that day, what visibility, – said the widow.

According to her, 8 minutes before the collision with the truck, Yuri called his partner, who was moving behind him. In a conversation, he complained about zero visibility and noted that he slept well and did not drive on the highway.

– The investigator insists that the truck was parked, and emergency signs were displayed, and he crashed into this truck. But I know my husband 1000%, he would definitely slow down. Every single day he drives along this road, he knows every pothole there. Yesterday I spoke with a witness, he was driving third after my husband, but he did not have a DVR. He says that this truck was not standing, there were no emergency signs. The truck began to slow down, it folded, it flew into the bump stop, so when it folded, its head was on the second lane along which my husband was driving. And the husband crashed into this head. That is, he simply did not have a chance to go left and right. The section of the road was just ice, – explained Tatiana. 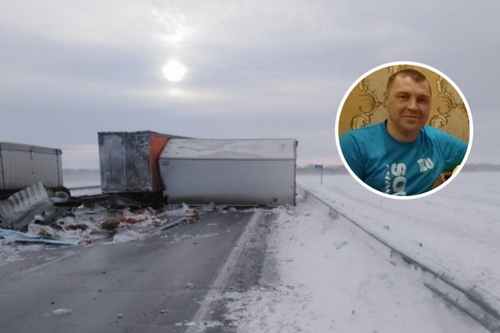 Now, according to Tatyana, the driver of the truck, into which Yuri’s truck crashed, insists that emergency signs have been installed on the road. In this regard, the woman is looking for eyewitnesses with DVR cameras who could capture the moment before or during the accident.

– He was a kind-hearted man, the soul of the company, who understood and knew that children and a wife were waiting for him at home. He was such a family man that there are no such people anymore. He left two orphans, the youngest – three years old. An irreparable loss for our entire family, – Tatiana shared. Drivers sprayed each other with gas on Trubnikov Square Novosibirets, who staged the shooting in the city center, boasted a video with new violations