The Brazil midfielder Paulinho has re-joined Guangzhou Evergrande after one season at Barcelona on a one-year loan, the Chinese club have announced.

Guangzhou have the option to purchase Paulinho next summer and, although no loan or potential transfer fees have been announced, any future permanent deal is expected to be considerably more than the £36m Barcelona paid for Paulinho less than 11 months ago.

“The level of the Super League has improved year by year and the development prospects are very good,” Paulinho told Guangzhou’s website. “After training in Evergrande and Barcelona, ​​and following the Brazilian national team in the World Cup, I got a good experience. I chose to return to the Super League this time, hoping to bring more championships to Guangzhou and Guangzhou fans. I also hope to give the Super League more excitement!”

In his first spell in China Paulinho played 84 games for Guangzhou after joining from Tottenham for £10m in 2015, contributing 22 goals and five assists. Despite his excellent form his transfer to Barcelona – and the large transfer fee – was seen as somewhat of a surprise but the 29-year-old made an immediate impact in La Liga and was arguably Barcelona’s best player in the early stages of last season. In total he made 49 appearances for the Catalan side, scoring nine goals.

After winning the league and cup double with Barcelona Paulinho was an integral member of Brazil’s World Cup squad and played in all five of their matches, including the 2-1 defeat by Belgium in their quarter-final tie on Friday. 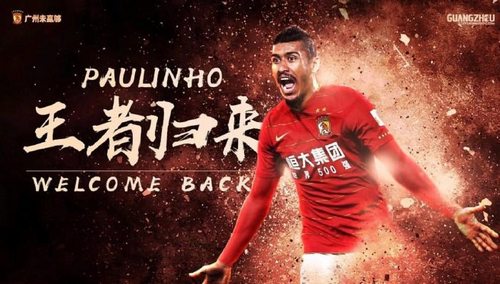 Paulinho becomes Barcelona’s third major departure of the summer, with Andrés Iniesta moving on a free transfer to Vissel Kobe in Japan and Gerard Deulofeu rejoining Watford for £11.5m. They have recently been linked with moves for Paulinho’s Brazil team-mate Willian at Chelsea, as well as the Sevilla defender Clement Lenglet, who has a release clause of £31m.

Overcame 82 km around the salt lake