The Giants announced Monday that Beckham’s fractured left ankle would require season-ending surgery this week, while the Texans declared Watt out for the year with a tibial plateau fracture in his left leg. Watt played in only three games in 2016 before a pair of back surgeries ended his season.

‘I can’t sugarcoat it, I am devastated,’ Watt wrote in a Tweet early Monday morning. ‘All I want to do is be out there on that field for my teammates and this city. I’m sorry.’

The winless Giants were also reeling on Monday.

‘I spoke to Beckham after the game,’ Giants coach Ben McAdoo said Monday during a conference call with reporters. ‘It’s a sad situation.’ 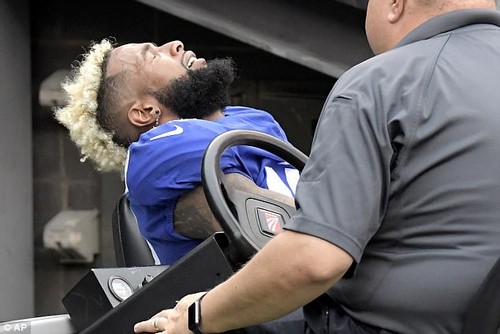 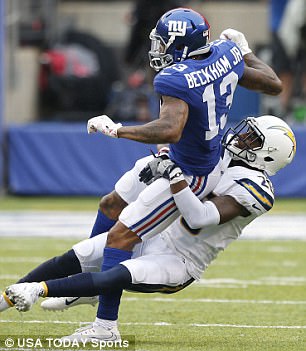 Painful: Beckham Jr can be seen here getting his ankle caught in the legs of Casey Howard. Giants receivers Brandon Marshall, Sterling Shepard and Dwayne Harris were also taken off

Watt was injured on the Texans’ opening drive, Sunday, while being engaged by a blocker. After being helped off the field, the former NFL Defensive Player of the Year was examined along the sideline before being taken to the hospital.

The Texans ultimately lost to the Chiefs, 42-34, dropping their record to 2-3 on the year.

But whereas the Texans’ loss started on the wrong foot Sunday, the Giants built an early 9-0 lead against the Chargers in Los Angeles, and seemed poised for their first win of the year when leading 22-20 with four minutes to play in the fourth quarter.

That all changed when Beckham attempted to make a catch across the middle of the field while being defended by Chargers cornerback Casey Howard.

Beckham Jr. landed awkwardly underneath Howard and snapped his ankle, leaving his team – already short-staffed after losing three other receivers earlier in the game – to suffer its fifth straight defeat. Giants wideouts Brandon Marshall and Sterling Shepard both hurt their ankles in the second quarter and Dwayne Harris fractured his foot in the third.

Captain Eli Manning could be seen grimacing as a crying Beckham was carted off the field.

With Beckham Jr out, Manning then fumbled the ball in Giants territory, which ultimately led to Chargers quarterback Philip Rivers’ game-winning pass to Melvin Gordon with less than three minutes to play.

Prior to his injury, Beckham had five catches for 97 yards and a touchdown.

Agony: Eli Manning (second from left) looks furious as Beckham Jr (right) is taken away. The Giants lost the game 27-22 after their star player was taken for ankle surgery

Fire rainbow stuns onlookers as it illuminates the sky