The Kremlin critic was sent to one of Russia’s most notorious penal colonies on returning to Russia from Germany, where he spent months recovering from a near-fatal poisoning that he blames on President Vladimir Putin.

He and his allies say his jailing for violating probation in an old fraud case is a pretext to silence his criticism of Putin.

Russian opposition figure Alexei Navalny on Wednesday announced he is launching a hunger strike from the prison colony where he is serving a 2.5-year sentence to demand proper medical treatment.

Navalny, 44, has been one of Putin’s most vocal domestic critics for the past decade, with a large following on YouTube where he and his team posts investigations exposing alleged corruption by Russia’s ruling elite.

In August 2020, Navalny fell suddenly ill on a flight from the Siberian city of Tomsk, where he had been promoting his “Smart Voting” strategy against the ruling United Russia party. The flight made an emergency landing in the city of Omsk where Navalny was brought to the hospital unconscious.

The anti-corruption campaigner fell into a coma and was airlifted to Berlin for treatment following a tense standoff between his team, who claimed he was poisoned, and the Omsk doctors, who said no traces of poison were found in his system. During his recovery in Berlin, European experts and the global chemical weapons watchdog determine that he was poisoned with Novichok, a Soviet-designed, military-grade nerve agent.

Despite pressure from the West, Russia has refused to open a criminal probe into Navalny’s poisoning.

Navalny returns to Russia with his wife Yulia on Jan. 17 after spending roughly four months in recovery in Germany.

While hundreds of supporters gather at Moscow’s Vnukovo Airport to greet Navalny, his flight changes directions at the last minute and lands at a different airport.

Navalny is promptly detained at passport control for allegedly violating parole in his 2014 suspended sentence for fraud while abroad. Navalny maintains that the fraud case against him is politically motivated.

The investigation offers a glimpse into the Russian president’s “palace” with photos, re-created images and drone shots of the property’s hookah lounge, “aqua discoteque,” two vineyards, oyster farm, underground hockey rink and other features. It also alleges that the palace was financed through a complex web of money laundering involving individuals close to Putin.

The video goes viral, racking up over 100 million views in a matter of weeks.

Navalny’s arrest and the “Putin’s Palace” investigation spark nationwide protests with tens of thousands of people rallying against Putin and calling for the opposition politician’s release.

The protests on Jan. 23 and Jan. 31 become some of the largest in Russia’s modern history. Over 10,000 people are detained at the rallies, with widespread reports of police brutality against peaceful protesters. Navalny’s closest allies are placed under house arrest on charges of “inciting mass violations” of coronavirus restrictions.

A Moscow court finds Navalny guilty of violating his probation in a 2014 fraud conviction by failing to report to his parole officers while recovering from poisoning abroad, sentencing him to 2.5 years in a penal colony.

Navalny’s team calls on supporters to rally in central Moscow immediately after the verdict is read. More than 1,000 supporters are detained amid heavy riot police presence.

Friction with the West

Russia expels diplomats from Sweden, Poland and Germany over their alleged participation in the pro-Navalny protests, sparking tit-for-tat measures from those countries.

Europe’s top human rights court calls on Russia to release Navalny, a demand that the Kremlin ignores. The European Human Rights Court previously ruled that Navalny’s 2014 conviction had been “arbitrary and unreasonable.”

Navalny goes on trial for charges of defaming a Russian World War II veteran, facing a fine of up to $13,000 and real jail time. The charges stem from a tweet in which he referred to the veteran and others who appeared in a pro-Kremlin video as “traitors.”

Amnesty International withdraws Navalny’s “prisoner of conscience” designation due to past nationalist and anti-immigrant rhetoric. The move sparks widespread backlash, with critics saying the group caved in to a “targeted campaign” to discredit Navalny by figures linked to pro-Kremlin media.

Brussels and Washington slap sanctions on high-ranking Russian officials over Navalny’s poisoning and imprisonment as well as persecutions of pro-Navalny protesters.

Navalny is transferred to Penal Colony No. 2 in the Vladimir region town of Pokrov, the infamous prison colony where he will spend the rest of his sentence. In an Instagram post, Navalny describes it as “a real concentration camp 100 kilometers from Moscow.”

Navalny’s allies announce they will stage “modern Russia’s biggest protest” to call for his release, saying they will wait to set a date until they receive 500,000 signatures. More than 360,000 people who plan to protest have registered so far.

Navalny’s lawyers say his health is deteriorating and his life may be at risk, adding that they have been barred from visiting their client. Navalny reports experiencing severe back pain and a loss of feeling in one of his legs and says prison medics have withheld a diagnosis. He also accuses Russian authorities of torture by depriving him of sleep in prison.

Prison authorities say he is in “stable and satisfactory” condition, a claim dismissed by his allies.

Navalny announces he is launching a hunger strike in prison to demand proper medical treatment and an end to “torturous” conditions. 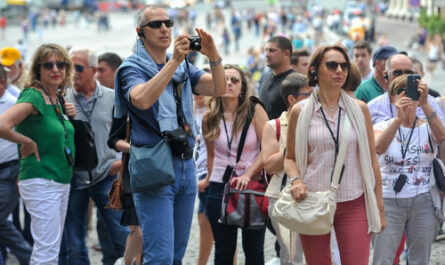 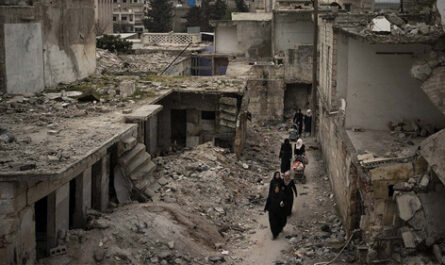