On Sunday she flew back with her husband to Russia from Germany, where the couple had spent five months as the Kremlin critic recovered from the poisoning with the Soviet-era Novichok nerve agent.

When police detained Navalny at passport control, Navalnaya embraced him, gave him a kiss, then stepped outside of Moscow’s Sheremetyevo airport, addressing a gathered crowd.

“Alexei is not afraid. I’m not afraid either and I call on you all not to be afraid,” she said over chants of “Yulia!”

As her husband faces increasing pressure from the authorities, Navalnaya has grown in prominence.

In August, while Navalny was in a coma and hospitalized in the Russian city of Omsk after he fell violently ill on a flight from Siberia to Moscow, she went to great lengths to get him transferred by medical aircraft to Germany.

From hospitals to courtrooms to demonstrations, Russia’s chief opposition figure Alexei Navalny is often flanked by his wife Yulia Navalnaya, who has been thrown into the limelight since his poisoning in August.

While Navalny was fighting for his life, she regularly kept journalists informed of his condition, veiling her emotions behind dark sunglasses and a calm demeanour.

Then she would go back into the hospital to chase down doctors, whom Navalny’s allies have accused of being pressured by Russia’s security services to hide that he was poisoned.

Navalnaya also made sure medical experts that arrived from Germany were able to get access to her husband.

And in perhaps her boldest move, she directly addressed President Vladimir Putin — the man Navalny accuses of ordering the poisoning — requesting permission to let them bring her husband to Berlin.

Aged 44 like her husband, Navalnaya has a degree in economics from a Moscow university. The couple, which met in 1998, celebrated their 20th anniversary in August while Navalny was in a coma.

In his first public words after coming to, Navalny wrote on his Instagram page: “Yulia, you saved me.”

And when he gave his first interview in October after checking out of Berlin’s Charite hospital, Navalnaya joined him.

“It was terrifying of course. But I understood I couldn’t relax … If I fall apart, then we all fall apart,” she told the popular Russian blogger Yury Dud during the joint appearance.

The poisoning saga, said Alexander Baunov of the Carnegie Center in Moscow, represented her “moment of transition from an accompanying figure to an independent character.”

“Now that Alexei is arrested,” he added, Navalnaya “will act independently.”

Her actions earned her the description of “one of the undisputed heroes of the year” for 2020 from the independent Russian newspaper Novaya Gazeta.

“Navalny was lucky. And we’re not talking about surviving Novichok,” Novaya Gazeta wrote, explaining: “With Yulia.”

“Her role has certainly changed. From the wife of a politician, she is herself becoming a politician,” political scientist Konstantin Kalachev told AFP.

“She has charisma and charm, she is a creative, courageous person, and she can easily replace her husband if necessary,” he added.

Baunov noted that some people “sympathize much more with her than with Navalny,” adding that people have grown tired of having the same main opposition figure for the past decade.

For their part, the Russian authorities appear to fear a scenario akin to Belarus, where political novice Svetlana Tikhanovskaya became the face of prolonged protests against strongman leader Alexander Lukashenko’s rule after her opponent husband was imprisoned.

On Saturday, a media outlet owned by a billionaire close to the Kremlin, Konstantin Malofeyev, threatened to publish intimate exchanges between Navalny and other women unless Navalnaya pledged not “to become Tikhanovskaya in Russia.”

But on Monday, a day after her husband’s arrest, Navalnaya stood firm.

Posting a photo of the couple during their return flight on Instagram, she wrote: “There is nothing we cannot face. Everything will definitely be fine.” 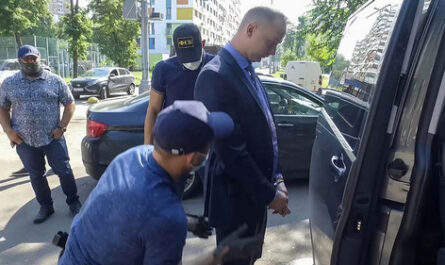