Former Donald Trump adviser Steve Bannon has been arrested and indicted for conspiracy to commit wire fraud and money laundering while raising money for a campaign to build the US-Mexico border wall.

Mr Bannon and two others were indicted for allegedly funnelling “hundreds of thousands of dollars” from the “We Build the Wall” online fundraising campaign to Brian Kolfage, the founder of the organisation who was also indicted by United States Attorney for the Southern District of New York (SDNY).

“As alleged, the defendants defrauded hundreds of thousands of donors, capitalising on their interest in funding a border wall to raise millions of dollars, under the false pretence that all of that money would be spent on construction,” Acting US Attorney Audrey Strauss said in a press release.

“We Build the Wall” started as a GoFundMe campaign in 2018, and it was designed to raise money from public funding to go directly towards building the wall at a time when the president was experiencing pushback from Congress. 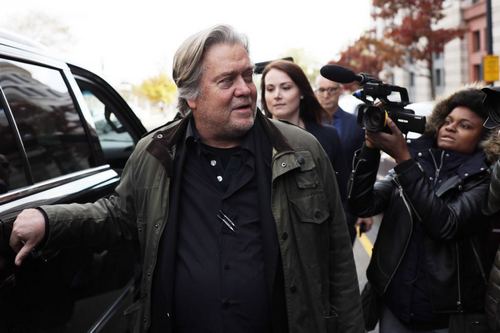 The crowdfunding campaign raised $25m from hundreds of thousands of donors, but not all of that funding went directly towards the wall, federal prosecutors allege.

According to the indictment, a non-profit run by Mr Bannon, identified as Non-Profit-1, received $1m of funding from the campaign. Some of this funding went towards Mr Bannon’s own personal expenses. This despite Mr Bannon, who previously served as the president’s campaign chairman and White House chief strategist, publicly calling the campaign a “volunteer organisation”.

He was arrested and indicted on Thursday and expected to appear in federal court later in the day. The Trump administration referred requests for comment to the Department of Justice, saying it was “not a White House matter”.

Mr Kolfage guaranteed at the start of the campaign that he would not take a salary or compensation while running the organisation, with 100 per cent of money raised to go directly towards the border wall. But he actually received $350,000 from the campaign and made efforts to conceal the money, the indictment alleges.

The other two men indicted were Timothy Shea, who was announced as the Acting Administrator of Drug Enforcement Administration in May, and Andrew Badolato.

Not only did the defendants allegedly funnel money from the “We Build the Wall” campaign into Mr Bannon’s non-profit, but they also moved it into a shell company controlled by Mr Shea, prosecutors said.

After finding out last October that the campaign was potentially under federal investigation, each of the four defendants made steps to hide their activity, according to the indictment.

Mr Bannon is the second campaign leader from the president’s 2016 campaign to face criminal charges. Paul Manafort, who was replaced by Mr Bannon as the campaign chairman, was convicted of unrelated fraud charges in 2018.

The Independent contacted the Trump campaign for a comment on Mr Bannon’s arrest.

White House Press Secretary Kayleigh McEnany said the president had “no involvement” in the crowdfunding campaign and previously said he thought it was “done in order to showboat”.

Mr Trump then addressed the arrest and indictment during a press pool.

He added: “I don’t like that project. I thought it was being done for showboating reasons. It was something I very much thought was inappropriate to be doing. “ House set to vote on virus relief, Biden on cusp of triumph