Huge numbers of people gathered for the funerals of two prominent rabbis in Jerusalem at the weekend, flouting the coronavirus restrictions announced by the government as the country entered a third national lockdown.

On Sunday, the first public funeral carried out was of Rabbi Meshulam Soloveitchik, the head of the Brisk yeshiva in Jerusalem, who died at the age of 99 after months of illness and Covid-19 infection.

News images showed his coffin carried through the city of Jerusalem surrounded by a crowd of thousands who arrived to pay homage, the latest in a number of incidents where ultra-orthodox communities in the country ignored the pandemic restrictions.

Thousands of black garbed supporters gathered outside the rabbi’s home and marched through the city, unable to observe social distancing given the numbers involved and many not wearing a mask, towards the cemetery where he was to be buried. A police spokesman told local media that he was powerless to “confront 20,000 people”.

Later on Sunday another crowd gathered for the respected rabbi Yitzhok Scheiner, once again flouting the lockdown rules. He had also tested positive for Covid and died at the age of 98, local media reports said.

Alon Halfon, a Jerusalem police official, told Channel 13 that police had little choice but to allow the massive procession for Soloveitchik to proceed. He said police action had helped reduce the crowd size and that some 100 tickets were issued for health violations. But in such a densely packed environment, with children among the crowd, attempting to disperse the crowd would have been “unwise and dangerous”, he said. 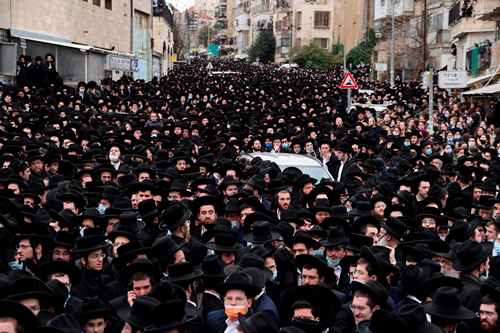 The scenes drew strong criticism from deputy prime minister Benny Gantz, who described it as “unequal enforcement” of the lockdown.

“Millions of families and children are locked in their homes and abide by the rules while thousands of Haredim crowd the funeral, most of them even without masks,” Mr Gantz tweeted. “We will not agree to the continuation of an ineffective fake lockdown. Either everyone is locked down – or everyone opens. The days of indulgence are over.”

The Netanyahu-led coalition government is set to further extend the national lockdown after a vote in favour by the cabinet on Sunday.

The country has limited gatherings to 10 people after a spike in infections in January, which saw the daily new caseload averaging over 6,000. Israel recently reported its highest ever daily increase of 15,000 infections on 25 January.

Despite the rising numbers of cases, Israel has been praised internationally for a rapid vaccination programme that has seen three million inoculations so far among a population of nine million. On Sunday it was announced that Israel would transfer 5,000 vaccine doses to Palestinian communities.

The country goes to the polls in March, and while Mr Netanyahu has been praised for the vaccination campaign there has been criticism over a failure to enforce proper lockdown measures under the pressure of angering his ultra-orthodox political allies.

According to the Associated Press, a disproportionately high number of Israel’s coronavirus cases are within the country’s ultra-orthodox minority. Many sects have kept schools, seminaries and synagogues open, and held mass weddings and funerals. The strictly religious community, which makes up around 11 per cent of Israel’s 9.2 million people, has been accounting for about 40 per cent of the new cases. 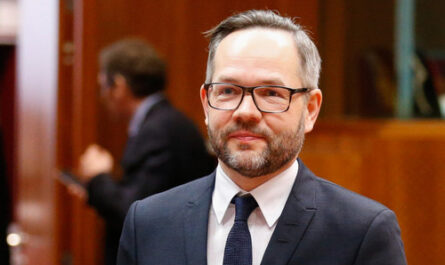