Over 30 people, including marine conservationists, civil defence members, coast guard officers, firefighters, lifeguards and locals, came together to free the mammals within 48 hours. The whales were stranded 360 km south of Buenos Aires, on the beach of the resort town of La Lucila del Mar.

Two humpback whales stranded along the Atlantic coast of Argentina were saved by rescuers on Tuesday.

On Sunday, a juvenile female humpback weighing approximately 8 tons and 32 feet long, was the first one to get stranded, according to the Mundo Marino Foundation.

The second whale, a male juvenile of the same species measuring over 27 feet long and approximately 7 tons in weight, got stuck on Monday afternoon. 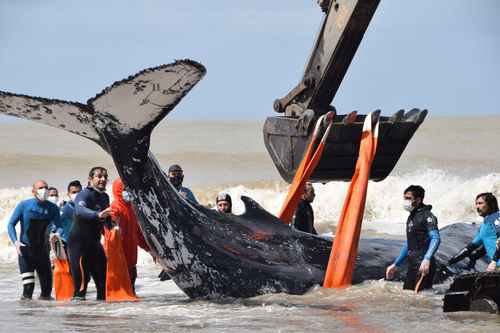 A local citizen alerted the foundation, who, along with other Argentinian officials, began the rescue operation. Upon arrival to survey the situation, the “primary support efforts were immediately carried out, including assuring the individual’s position allowed it to breathe”.

Rescuers made sure that the animal’s pectoral fins remained underwater in order to stabilise the body temperature.

Despite the difficulties, the rescuers tucked cables and slings under the female whale’s body, then connected it to a backhoe tractor crane to place her in deeper waters.

The re-floating procedures continued so that the whale could reestablish its mobility, reducing the cramping caused by the grounding, a statement by the foundation said. Shortly after, the animal began to swim under its own power.

In the midst of the rescue operation, the waves knocked the whale over and the mammal’s blowhole was underwater, causing difficulty to breathe. “Thanks to a quick action, they were able to turn it over,” Sergio Rodriguez Heredia, a biologist at the foundation’s rescue centre said.

The stranded male was noticed on Monday night and rescue work began the next morning seeing it was in a “good state of health.”

The rescuers employed the same technique used on the female whale and successfully released the stranded male. “It was necessary to straighten the animal, use the assistance of a backhoe and special slings to move it to a depth where it would be possible for it to float,” said Augusto Giachetti, director of the Civil Defence’s coastal division.

The whale reacted quickly and was able to swim out to sea.

Videos shared by the foundation showed rescuers cheering as the animals made it to deeper parts of the ocean.

According to the foundation, there have been recurring incidents of whale strandings in Argentina and Brazil in recent months, leading to concerns among environmentalists.

Majority of Florida voters, including Republicans, say schools should have freedom to set mask rules