The administration has been scrambling to mend fences with France and the European Union more broadly since the Sept. 15 announcement of the Australia-U.S.-UK agreement, known as AUKUS, which canceled a multibillion-dollar Australian-France submarine deal.

All sides agree it will take time to repair those ties. The State Department said Blinken’s talks will be aimed at “further strengthening the vital U.S.-France relationship on a range of issues including security in the Indo-Pacific region.”

“We recognize this will take time and it will take hard work,” said Karen Donfried, the newly confirmed top U.S. diplomat for Europe.

Secretary of State Antony Blinken will visit France next week as the Biden administration tries to smooth over hurt feelings and potentially more lasting damage caused by its exclusion of America’s oldest ally from a new Indo-Pacific security initiative, the State Department said Friday. 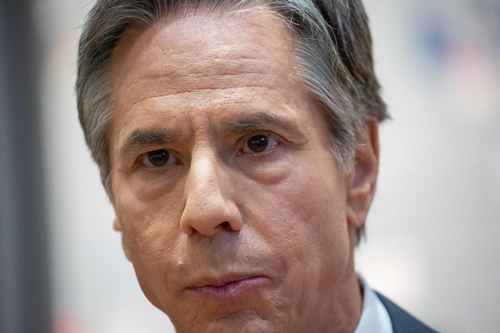 The department said Blinken will visit Paris starting Monday for an international economic conference but highlighted that he will also meet with French officials to discuss the rupture in relations.

Other matters to be discussed will include “the climate crisis, economic recovery from the COVID-19 pandemic, the Transatlantic relationship, and working with our Allies and partners to address global challenges and opportunities,” the department said.

Friday’s announcement came a day after the White House announced that national security adviser Jake Sullivan had met with the French ambassador to the U.S. to try to restore trust between the countries. French officials have said AUKUS was a “stab in the back.”

Sullivan met with French Ambassador Philippe Etienne on his return to Washington after having been recalled to Paris by French President Emmanuel Macron in an unprecedented display of anger to protest the exclusion of France and the European Union from AUKUS, which is aimed at countering China’s growing influence in the Indo-Pacific.

Those discussions followed a Sept. 22 phone call between President Joe Biden and Macron and a Sept. 23 meeting between Blinken and French Foreign Minister Jean-Yves Le Drian in New York on the sidelines of the annual UN General Assembly. Biden and Macron are due to meet in Europe later this month.

The ostensible reason for Blinken’s trip to France, which had been planned well before the AUKUS ruckus, is to co-chair a ministerial meeting of the Paris-based Organization for Economic Cooperation and Development on Tuesday and Wednesday about climate change and security.

Former Secretary of State and current U.S. climate envoy John Kerry will also attend the Paris talks, which will take place just weeks before the next U.N.-backed international conference on climate, in Glasgow, Scotland.