Ady Barkan, one of the most prominent American healthcare activists, appeared at the Democratic Convention to urge Americans to vote for Joe Biden and warn of an “existential threat” to healthcare if Donald Trump is re-elected.

The 36-year-old is dying from amyotrophic lateral sclerosis, or ALS, also known as Lou Gehrig’s disease, a degenerative disease that debilitates physical function.

His 2016 diagnosis compelled him to become a powerful and public advocate for Medicare for All, facing elected officials and protesting at the Capitol to demand health coverage as his body degenerated.

Mr Barkan appeared on the second night of the convention in a recorded video, to back the former vice president, who has not endorsed Medicare for All. But Mr Barkan stressed the danger of a second term for Mr Trump, who has sought to dismantle the Affordable Care Act, which would eliminate health coverage for millions of people and undermine efforts to put on the president’s desk a “bill that guarantees us all the health care we deserve”.

“Like so many of you, I have experienced the ways our healthcare system is fundamentally broken,” Mr Barkan said. “Enormous costs, denied claims, dehumanising treatment when we are most in need. … We live in the richest country in history and yet we do not guarantee this most basic human right. Everyone living in America should get the healthcare they need regardless of their employment status or ability to pay.”

The former vice president has rejected a Medicare for All approach, pitching instead a “public option” as part of a healthcare reform package that would expand the ACA, landmark legislation passed with Mr Biden’s support under Barack Obama’s administration. Medicare for All would guarantee health coverage to every American through a “single-payer” plan with the federal government, without private insurance or premiums. 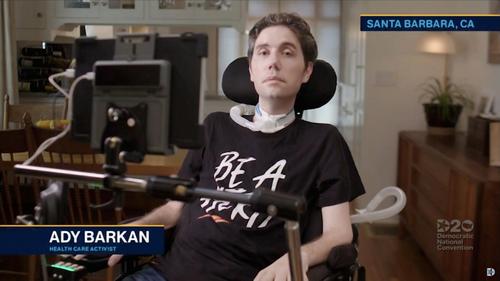 But Mr Barkan, who initially supported Elizabeth Warren and Bernie Sanders during the campaign, has joined progressive Democrats initially wary of a Biden presidency at the onset of the 2020 campaign to prevent what they have warned will be a dangerous second term for the incumbent, one that the Vermont senator warned on Monday could jeopardise the gains made by progressives over recent years.

The pandemic has laid bare the dysfunctions and inequities in American healthcare, and its future will become a crucial campaign issue in the months ahead.

Single-payer healthcare also enjoys broad support among Democrats – 87 per cent support Medicare for All, according to an August poll from Hill/HarrisX. A 2020 study from the Kaiser Family Foundation found that 71 per cent of Americans support guaranteeing healthcare as a right, while roughly half of Americans support both a Medicare for All plan and a public option.

More than 5 million people lost their health coverage over the last several months, joining roughly 28 million other uninsured Americans and millions of others considered underinsured, whose care costs outweigh what they can afford.

“Since my shocking diagnosis, I have travelled the country, meeting countless patients like me, demanding more of our representatives and our democracy,” Mr Barkan said. “Today we are witnessing the tragic consequences of our failing healthcare system. In the midst of a pandemic, nearly 100 million Americans do not have sufficient health insurance. And even good insurance does not cover essential needs like longterm care. Our loved ones are dying in unsafe nursing homes. Our nurses are overwhelmed and unprotected, and our essential workers are treated as dispensable.”

The activist appeared during a primetime speaking slot moments after remarks from former presidents Bill Clinton and Jimmy Carter, and before John Kerry, bridging the ideological divide between the party’s establishment figures and a growing progressive flank that is making only rare appearances during the week-long event.

Beginning with a video message to his daughter recorded in 2018, when he was still able to physically speak, the segment cut to Mr Barkan in 2020, relying on a computer to vocalise.

His appearance also followed a segment, narrated by Jeff Bridges, that illustrated Mr Biden’s personal relationships to American healthcare, from the deaths of his first wife Neilia and infant daughter Naomi in the days leading up to his first term as a US senator from Delaware. Throughout his campaigns, he has related his ongoing recovery from his trauma, as well as the death of his adult son Beau Biden following a brain cancer diagnosis in 2015, in his calls to expand healthcare.

In a brief virtual roundtable with patients, the candidate said: “The fear that you all live in, understandably, if somehow tomorrow they said, ‘no insurance, you’re not covered’ – is just devastating.