Donald Trump has vowed to put a toll on vehicles entering the US from Mexico in order to force the country’s southern neighbour pay for his much talked of border wall.

On a visit to Arizona, one of a number of states likely to be an election battleground, the president repeated his frequently made claim that Mexico will pay for a such a barrier.

“They’re going to pay at the border, at the gate, cars going through, we’re going to do a toll – or we may do a toll,” Mr Trump said during an event in Yuma, near to the border.

According to Bloomberg News, asked as to whether he still believed Mexico would foot the bill, he added: “Mexico is paying for the wall, yeah.”

During his 2016 election campaign, and often since then, the president has insisted Mexico will pay for a physical barrier along the southern border, that he claims will help deter migrants from Central America.

Mexico has always insisted it will not pay for such a wall, and experts have questioned whether it would do anything to address immigration numbers. Many see it something Mr Trump can use to appeal to his supporters, many of whom support his hardline approach. 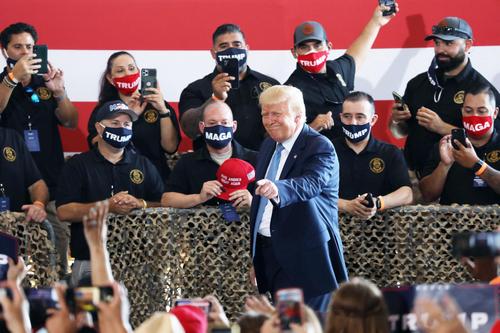 Mr Trump has claimed that hundreds of miles of walls have already been constructed. In truth, a report by the Washington Post suggested the president was unlikely to be able to point to more than 500 miles of barrier by next year, much of it replacing structures that were already in place.

Speaking on his second day of campaigning intended to disrupt the Democratic National Convention – by tradition, Republicans and Democrats have avoided holding events during each other’s once-every-four-year gatherings – the president took the chance to attack Joe Biden.

“Biden’s plan is the most radical, extreme, reckless, dangerous and deadly immigration plan ever put forward by a major party candidate. It must be defeated. and it will be defeated on November 3,” he said.

He also found time to praise himself, crediting himself with stopping the caravans of migrants from Central America that saw hundreds of thousands of people take to the roads.

“The caravans don’t come up any more. We were paying hundreds of millions of dollars to Guatemala, Honduras and El Salvador. When we caught a murderer and we wanted to bring them back to one of those countries they wouldn’t take them,” he said. “Because of that, we stopped paying them.”