It’s been nearly six weeks since Donald Trump left the White House and appeared before a crowd to deliver a speech.

And while the former Republican president was over an hour late on Sunday for his keynote remarks at the annual Conservative Political Action Conference (CPAC) in Orlando, Florida, he picked up right where he left off when he departed Washington, DC on 20 January.

In a characteristically chaotic address that lasted roughly 90 minutes, Mr Trump teased a possible bid for president in 2024, repeatedly refused to acknowledge Joe Biden as his rightfully elected successor, and railed against the Biden administration’s opening act on everything from immigration to gas and energy policy to trans rights.

Sunday’s speech marked Mr Trump’s first major address to the public since Mr Biden took over the presidency. It also underscored his plans to harness the power and historical prestige of Republican institutions to propel his legacy and unfinished business forward.

“Citizens in this room, all across our country, I stand before you today to declare that the incredible journey we’d begun together … we began it together four years ago, and it is far from being over,” he said. 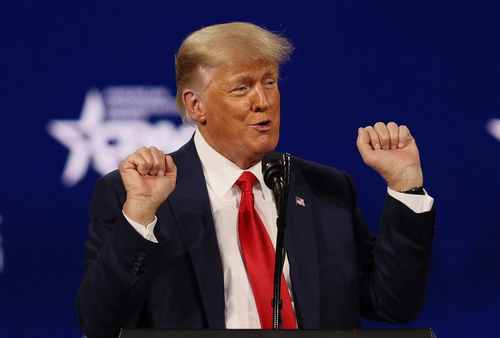 As expected, Mr Trump refused to acknowledge the results of the 2020 election.

After taking a few minutes to relish the fawning crowd — “Do you miss me yet?” he joked — the former president quickly launched into a series of broadsides against the Biden administration’s early executive actions rolling back his hardline immigration agenda.

“This alone should be reason enough for Democrats to suffer withering losses in the 2022 midterms and to lose the White House decisively four years from now,” Mr Trump said.

“As you know, they just lost the White House,” he said, referring to Mr Biden’s campaign, which won the Electoral College 306-232.

“But it’s one of those — but who knows, who knows, I may even decide to beat them for a third time, OK?” he said.

The convention room went wild with applause and cheering.

Other aspects of Mr Trump’s speech on Sunday demonstrated he is focused on uniting the Republican party in a column behind his policy goals and cult of personality, announcing to the crowd he intended to work within the GOP to advance his “America First” agenda.

“I am not starting a new party. That was fake news,” he declared.

“The brave Republicans in this room will be at the heart of the effort to oppose the radical Democrats, the fake news media, and their toxic cancel culture,” he said.

While recent polling indicates most Americans who voted for Trump have said they would join a hypothetical offshoot party founded by the former president, that majority was not overwhelming. Deep fissures run through the GOP over how to move forward in the aftermath of his presidency, but Mr Trump was emphatic that breaking away from the party would cede power to the Democrats.

“We’re not starting new parties. You know, they kept saying, ‘He’s going to start a brand new party.’ We have the Republican Party,” Mr Trump said, as the crowd roared.

“It’s going to unite and be stronger than ever before,” he said.

Mr Trump derided those who have suggested he could try to found his own party, highlighting how it would be political suicide for the conservative electorate to divide its vote between candidates from two different parties.

“Wouldn’t that be brilliant — let’s start a new party and let’s divide our vote, so that you can never win,” Mr Trump cracked.

“No, we’re not interested in that. We have tremendous polling figures,” he said, rattling off his approval and favourability ratings among GOP-registered voters.

Never one to strictly adhere to what appears on his teleprompter, Mr Trump seized the opportunity on Sunday to rattle off several extended takes on deeply divisive issues such as “cancel culture,” the Biden administration’s shutdown of the Keystone XL pipeline project, and the newly charted course being taken on the coronavirus pandemic.

Trump offers his thoughts on trans rights and women’s sports

He was referring, presumably to the so-called Equality Act passed in the Democratic-controlled House last week that seeks to explicitly ban discrimination based on sex, sexual orientation and gender identity. The bill also provides protections for trans women under the famed Title IX law that stipulates equal opportunity for women in college athletics.

“If this does not change, women’s sports as we know it will die,” he predicted.

After a long round of applause, the former president chuckled to himself: “And I don’t even know — is that controversial?”

He relayed to the CPAC crowd that somebody on his speech-writing team told him a riff on women’s athletics would touch off some nerves.

Dozens of CPAC speakers and panelists over the last four days in Orlando have bemoaned the scourge of “cancel culture” in silencing certain (conservative) political voices.

Mr Trump has been banned for life from Twitter, Facebook, and other social media accounts and web services for insisting, falsely, that the 2020 election was “stolen” from him and fomenting the anger among his base of supporters that resulted in the bloody insurrection at the Capitol on 6 January.

But the president used his keynote address on Sunday to exact political revenge on the 10 House Republicans who voted to impeach him for inciting the Capitol riot, name-checking each of them one by one as the crowd of his supporters sneered and jeered.

Ms Cheney said last week of Mr Trump’s upcoming appearance at CPAC, “I don’t believe that he should be playing a role in the future of the party or the country.”

Mr Trump responded in kind — and then some — by referring to her as “the warmonger, a person who loves seeing our troops fighting”.

During his presidency, Mr Trump feuded with Ms Cheney and other Republican establishment figures over the US’s role in the Middle East, with the former president pressing for troop withdrawals but others such as Ms Cheney and Senate GOP leader Mitch McConnell insisting on a stronger presence.

If there was one moment from the speech that captured just how firm of a grip Mr Trump has over the modern conservative movement, it was his comments on the weight of a Trump endorsement in congressional and Senate elections.

At the mention of Mr McConnell’s name, the crowd issued a drawn-out, monosyllabic response: “Boo.” 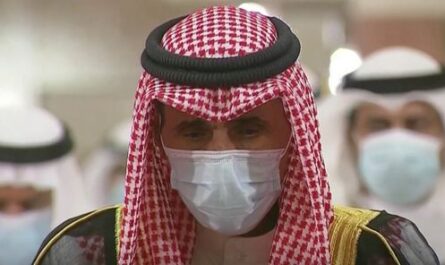 What next for Kuwait and the Middle East as region loses its ‘peacemaker’?