Fox News host Tucker Carlson has sparked controversy after claiming a teenager charged with killing demonstrators in Wisconsin protesting the shooting of Jacob Blake was trying to “maintain order when no one else would”.

The television personality made the controversial comments as protests over the police-shooting of Mr Blake continued throughout the week, after video footage of the confrontation between a white officer and Mr Blake, a black man, went viral and drew national media attention.

“So are we really surprised that looting and arson accelerated to murder?” Carlson said on Wednesday night. “How shocked are we that 17-year-olds with rifles decided they had to maintain order when no one else would?”

Kyle Rittenhouse, a 17-year-old Illinois resident, was listed as a fugitive from justice and charged with first-degree intentional homicide after police said he allegedly killed two people and injured one other person during a shooting amid Tuesday night’s protests.

After the shooting rampage occurred, the Associated Press reported that a gunman could be heard saying: “I just killed somebody.” 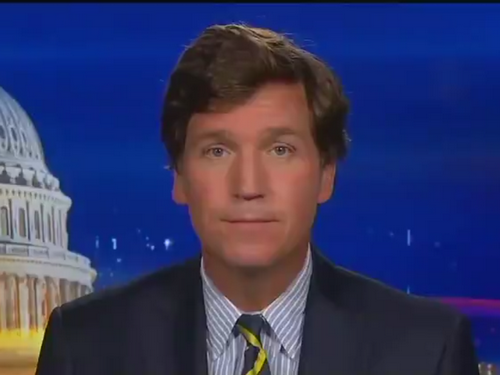 The suspected gunman was told by police officers to walk past them with his hands raised in the air – while still holding his rifle – before he was arrested.

Mr Blake was not found to be armed with any weapons when he was shot in the back by officers, police have said. Officials said a knife was discovered in Mr Blake’s car after he was shot seven times in the back.

The governor of Wisconsin has requested federal assistance and President Donald Trump deployed the National Guard after the shooting.

“A senseless tragedy like this cannot happen again,” Tony Evers, the Democratic governor of Wisconsin, said in a statement.

He added: “I again ask those who choose to exercise their First Amendment rights please do so peacefully and safely, as so many did last night. I also ask the individuals who are not there to exercise those rights to please stay home and let local first responders, law enforcement and members of the Wisconsin National Guard do their jobs.”

Carlson slammed Kenosha officials during his show on Wednesday night, saying: “Kenosha has devolved into anarchy, the authorities in charge of the city abandoned it … People in charge, from the governor of Wisconsin on down, refused to enforce the law. They stood back and watched Kenosha burn.”