The trial of three Polish activists accused of “offending religious beliefs” will start on Wednesday, according to LGBT+ rights organisation ILGA-Europe, and could result in each one being jailed for up to two years.

Elżbieta, Anna and Joanna – whose last names have not been released – were arrested in 2019 and charged the next year after they stuck up posters of the Virgin Mary adorned with a rainbow halo, symbolic of the popular flag used to represent the LGBT+ community.

Polish Conservative politician Joachim Brudziński took to Twitter at the time of Elżbieta’s arrest in 2019 – she was taken in by police before Anna and Joanna – to announce that someone had been arrested for “carrying out a profanation of the Virgin Mary of Częstochowa”.

Police arrested and detained Elżbieta upon her return to Poland from a trip abroad with Amnesty International. An official investigation was then launched in May 2019, resulting in all three women being charged in July 2020.

The trial, supposed to start in November but postponed until this Wednesday (13 January), has since garnered worldwide attention – with a coalition of human rights organisations, including ILGA-Europe and Amnesty International, clubbing together to call for Polish authorities to drop the charges and allow the three women to exercise their right to “peaceful activism” and “freedom of expression”. 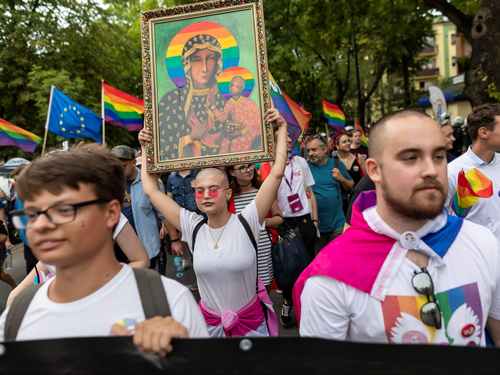 The groups said in a joint statement that Polish authorities “should amend their legislation and bring it in line with international and regional human rights standards” and “abstain from using it against activists to unduly curtail their right to freedom of expression”.

The three women facing trial have all been charged with “offending religious beliefs”, under article 196 of Poland’s Criminal Code, which states “anyone found guilty of intentionally offending religious feelings through public calumny of an object or place of worship liable to a fine, a restriction of liberty, or to imprisonment for a maximum of two years”.

Authorities allege that Elżbieta, Anna and Joanna “publicly insulted an object of religious worship in the form of this image which offended the religious feelings of others”.

The trio supposedly pasted the modified Virgin Mary posters around the central Polish city of Plock, on 29 April 2019, in public spaces such as portable toilets, dustbins and road signs. They now face up to two years in prison if found guilty.

“Having, created or distributing posters such as the ones depicting the Virgin Mary with a rainbow halo should not be a criminal offence and is protected under the right to freedom of expression,” the rights group coalition said in their joint statement, posted on ILGA-Europe’s website.

The organisations said article 196 of the Criminal Code “imposes undue restrictions on the right to freedom of expression” by allowing authorities too much leeway to “prosecute and criminalise individuals for expression that must be protected”.

“This is incompatible with Poland’s international and regional human rights obligations,” they warned.

Amnesty International has previously called on Polish authorities to amend article 196 of the Criminal Code, which it said “criminalises statements protected by the right to freedom of expression”.

Some 140,000 people have joined an international campaign urging Poland’s prosecutor general to drop the “unfounded charges” against Elżbieta, Anna and Joanna. As it stands, though, the trial will go ahead and all three women risk spending time behind bars.

“Elżbieta, Anna and Joanna stood against hate and discrimination and for years they have been fighting for a just and equal Poland,” the coalition’s statement ends by saying.

“They deserve to be praised and not taken to court for their activism.”