Julia Jackson, the mother of Wisconsin man Jacob Blake, who was shot several times by police on Sunday, says she has the “utmost” respect for president Donald Trump as she apologised for missing his call.

“And then also, for president Trump, I’m sorry I missed your call!,” Ms Jackson told CNN in a press conference on Tuesday. “Because, had I not missed your call maybe the comments you had made would have been different. I’m not mad at you at all. I have the utmost respect for you as the leader of our country.”

It is unclear what comments Ms Jackson was referring to. The president has yet to comment on the shooting of Mr Blake, which took place in front of his three young children.

However, the president’s son, Donald Trump Jr on Monday drew attention to Mr Blake’s prior criminal convictions when he retweeted a post by a right-wing commentator.

During Tuesday’s press conference – the first Ms Jackson and her husband Jacob Blake Sr have given since white officers shot their black son several times – repeated their calls for calm after another night of unrest in Kenosha.

The pair said they had been praying for police officers and denounced the violent scenes that had been taking place across the city since Sunday’s shooting. “Please, don’t burn up property and cause havoc, and tear your homes down, in my son’s name”, Ms Jackson told reporters. 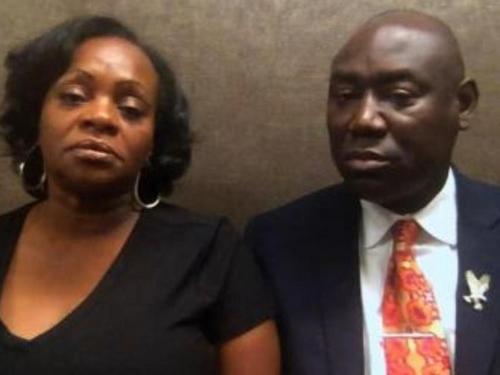 The couple also said on Tuesday that their son had been paralysed from the waist down as a result of the shooting, hours before protesters and authorities clashed for a third night of civil unrest in the lakefront town.

Police in riot gear fired rubber bullets, tear gas and flash-bang rounds as they skirmished after dark with 300 to 400 demonstrators defying a dawn-to-dusk curfew outside a courthouse and adjacent park in downtown Kenosha.

The Kenosha County Sheriff’s Department also deployed at least four armoured patrol vehicles fitted with roof turrets from which deputies fired tear gas canisters into the crowd, many of whom hurled water bottles, bricks, firecrackers and other objects back at police.

But there was no immediate sign of buildings or cars being set ablaze, as happened on Monday night.

About three hours after declaring the protest an unlawful assembly, authorities had managed to push Tuesday night’s crowd out of the downtown park, with demonstrators scattering down streets.

The disturbances came hours after Wisconsin Governor Tony Evers declared a state of emergency and vowed to deploy additional National Guard troops in a bid to restore order in the town.

Mr Blake, 29, a father of six, was struck from behind at point-blank range in a hail of bullets fired on Sunday by police who were following him with guns drawn as he walked away from officers to his car and opened a door to the vehicle.

Three of his young sons inside the automobile – aged 3, 5 and 8 – witnessed their father being gunned down, according to civil rights attorney Ben Crump, who represents the Blake family and appeared at Tuesday’s press conference.

A bystander captured the encounter in video footage that immediately went viral, unleashing outrage over the latest in a long series of instances in which police have been accused of using indiscriminate lethal force against African Americans.

Blake, who had been attempting to break up a quarrel between two women, was struck by four of seven gunshots fired at him, all by one officer, and there was “no indication he was armed,” Mr Crump said in an ABC News interview on Tuesday.

The police have not yet explained why Mr Blake was shot. Kiev Has Sanctioned Putin’s Best Ukrainian Friend. What Next? 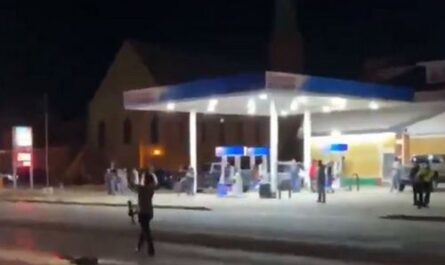 One person shot dead as gunfire erupts during Wisconsin protests