The teen is first cousins with Kourtney, Kim, Khloe, and Rob Kardashian, as well their half-sisters Kendall and Kylie Jenner – and she can easily pass for one their sisters.

The Kardashian-Jenner sisters are known for their stunning good looks and enviable figures, but it turns out they aren’t the only ones in the family who are blessed with striking beauty.

Natalie Zettel, 18, from San Diego County, California, is the daughter of Kris Jenner’s younger sister Karen Houghton, and while she has managed to stay out of the limelight during her family’s rise to fame, she has clearly inherited her famous cousins’ good looks.

Could be sisters! Natalie is the spitting image of her first cousin Kendall Jenner

Close as can be: Natalie took to Twitter in August to share this photo in honor of her cousin Kylie Jenner’s 20th birthday

With her long dark hair and lithe frame, Natalie is the spitting image of Kendall, and like her 21-year-old supermodel cousin, she is also pursuing a career as a model.

Although she has mostly flown under the radar, Natalie hasn’t been shy about paying tribute to her cousins on social media.

Most recently, Natalie took to Twitter in August to wish her cousin Kylie a happy 20th birthday, sharing a sweet photo of them cuddled cheek to cheek.

A few months before that, she spent Mother’s Day with their mutual grandmother, Mary Jo ‘MJ’ Campbell, and in February she struck a pose in one of her cousins’ Kendall + Kylie’s swimsuit designs. 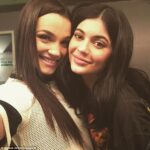 Famous family: The California teen is first cousins with Kourtney, Kim, Khloe, and Rob Kardashian, as well their half-sisters Kendall and Kylie Jenner

Throwback: Natalie revealed in 2013 that she is closest with Kendall and Kylie but they are close in age

Around that time, she also posted a picture of Kendall walking in Alexander Wang’s Fall/Winter 2017 show, tweeting: ‘My cousin is slaying fashion week!’

Natalie opened up about her famous cousins in an interview with Star magazine in 2013, insisting that she sees them as family and nothing more despite their incredible fame.

‘They’re my blood. They’re always going to be there – I’m stuck with them – but I love my family. I’ve known them since I was a little toddler,’ she explained. ‘I’m closest with Kendall and Kylie because we’re close in age.

‘It’s not weird for me to have a large, famous family because I knew them before all the fame. People are like, “Oh my Gosh! You’re cousins with the Kardashian family? Is that weird?” And I say, “No.” They’re nothing special. In my eyes, they’re just my family.’

Lookalikes: In February, the San Diego County-native shared this throwback photo of herself with Khloe and Kim

All made up: Like her cousins, Natalie knows how to achieve perfectly arched brow and long lashes

Laying low: Natalie is following in Kendall’s footsteps and starting a career as a model

Although Natalie appears to be close with her cousins, she has yet to make an appearance on Keeping Up With the Kardashians or any of the family’s other spin-off reality shows.

It has been rumored in that Kris deliberately tries to keep Karen out of the spotlight so her sister doesn’t embarrass the family.

Natalie’s mom Karen is known as her cousins’ ‘crazy aunt’, and she has candidly spoken to the press about her rocky relationship with her sister.

Four years ago, Karen told In Touch that her sister Kris ‘came out of the womb saying, “Where’s my Ferrari?”‘

Strike a pose: Natalie is also a fan of taking selfies – much like her cousin Kim

Achievement: Natalie and her mom Karen are pictured celebrating her high school graduation in 2016

Fun in the sun: The two enjoyed a vacation in Palm Springs together over the summer

‘She’s a workaholic, a hustler. It’s about wanting power. It’s Gucci purses, Bentleys, all the things I don’t care about that she does. You do these things because you are unhappy. Money is Kris’ whole world,’ she added.

Karen also revealed to Daily Mail Online in 2014 that her niece Kim offered to buy her a plane ticket so she could attend her wedding to Kanye West in Paris, but she declined.

At the time, she explained she was more concerned about the wildfires sweeping near her San Diego County home than attending her niece’s third wedding.

‘If your house was going to burn down would you go to Paris? Screw it – I’ve been to two weddings of Kim! But I’m really happy for her and I do have a present for her,’ she said at the time.

A million illegal immigrants will not be removed from UK