“It’s like they’re thinking of everything,” said Brad Paisley at his invitation-only Xbox Halloween BBQ at the Ruby in Nashville, a replica of Iron Man’s Arc Reactor glowing beneath his shirt. “It’s like they’re taking leaps the way Pixar takes leaps.” 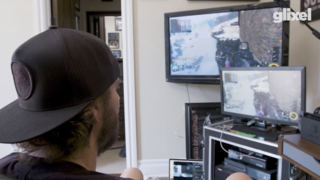 The family-friendly event, which the country singer and avowed gamer hosted with his wife Kimberly Williams-Paisley on October 27, took place as part of the run-up to the Xbox One X release on November 7. With roughly 10 gaming stations set up throughout the space, attendees clad in Halloween costumes tried out games like Madden NFL 18 and NHL 18. A kid dressed as Captain America feverishly danced along to Just Dance 2018. Tiny versions of Jason Voorhees and Master Chief played Super Lucky’s Tale.

Paisley, who began to shed pieces of his Iron Man costume as the night wore on, finished in second place at Forza Motorsport 7.

“That’s one of my favorites,” he said of Forza. “Also, the thing about it – it’s very intuitive. Sometimes in the past, these driving games have been just too sensitive, and you almost can’t quite ever find that sweet spot in the controls that totally feels like you’re driving. Right away, the first time I sat down with it, I was able to finish second. On the easy setting, but that’s a good sign. That means what I’m telling it to do it’s doing.”

“These graphics and everything about it, it’s a leap that’s noticeable,” said Paisley of the Xbox One X’s 4k resolution. “Sometimes you don’t notice these leaps, but this one … now it looks real. I mean, the football game out there – there’s moments where it’s like, ‘Did that guy just get hurt?’”

Paisley and his wife explained that their two young sons especially enjoy Minecraft – which they as parents appreciate for its world-building elements, saying, “You don’t unplug from your creativity with it.” Paisley himself enjoys games in the Batman: Arkham series, as well as driving games like Forza. But Star Wars Battlefront is likely his favorite.

“I know Battlefront had some detractors, but I always loved just the fact that it felt like you were in that world. And I can’t imagine what the new graphics are going to look like – especially on this, which is 4K. It’s gonna be crazy.”

Paisley later joked about how much he’ll let his kids play the Xbox One X.

“They need to be limited so that I can play. … They’re gonna earn it at some point, and then I’m going to say, ‘All right, that’s enough. Go up to your rooms.’ And then I’ll be sitting down there with it myself.”