There were cheers as the Trump baby blimp – a six-metre (20ft) tall inflatable with small hands, a tiny mobile phone and a giant nappy – took to the air in Parliament Square on Friday morning, as a day of protest against the US president got under way.

The inflatable took to the air at precisely 9.30am outside the Palace of Westminster. Campaigners had raised more than £29,000 to pay for it and the London mayor, Sadiq Khan, had given permission for it to fly.

Hundreds of protesters and curious tourists watched the blimp rise, ushered by the self-styled “Trump babysitters” – who came together to take the demonstration to the skies.

About 15 minutes earlier there was excitement on the ground as two military helicopters passed overhead; the blimp was fully inflated but moored to the ground. “Quick, turn him around,” a cry went up, but organisers said he was not allowed to take to the air before 9.30am. If Trump had been in the helicopter and looking out of the window, he might have caught a glance of Baby Blimp’s behind.

Sheila Menon, one of the Trump babysitters, said the protest was the perfect antidote to the misery created by president. “For me this is British political satire at it’s finest,” she said. “You can’t dismiss this as childish or offensive. It is a creative, safe and non-violent way to make a real political statement and hold oppressors to account.” 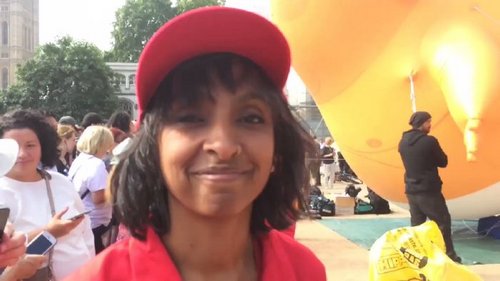 As the blimp went up, a visitor told one of the organisers: “As an American it means so much to us that you have done this. Thank you so much.”

The idea of the blimp originated with a group of friends and was put in motion by the London activist Leo Murray, who set up an online campaign with the hope of raising £5,000; the figure stands at £29,000 and counting. Murray has now said the money could be spent sending the inflatable to other places where people want to protest against Trump’s presence, and may make its way to Australia, where the US leader is expected to make a trip in November.

Tens of thousands of protesters are expected to take to the streets in London on Friday, with further demonstrations planned for this weekend in Scotland. At midday protesters gathered by the Women’s March at Portland Place began marching to a rally at Trafalgar Square. Another protest organised by Together Against Trump, which includes trade unions, Stop the War, Friends of the Earth, CND and Momentum, will meet at the BBC’s headquarters at 2pm, ending at 5pm in Trafalgar Square.

Many protesters had travelled a long way to attend: the Rev Nigel Sinclair had come from Leeds for the #TrumpBabyBlimp protest. “I wanted to make sure middle England was represented,” he said. “Trump’s politics are obscene, whether it is his treatment of women or immigrants, and I felt like I had to make the journey to take part. I think it’s fantastic. It’s a very British response to a horrible world leader.”

The Reverend Nigel Sinclair had travelled from Leeds for the #TrumpBabyBlimp protest. “I wanted to make sure middle England was represented,” he said. “His politics are obscene and I felt like I had to make the journey to take part.” pic.twitter.com/yAb6IfURbx

DD Davis, a political artist, was wearing a Trump badge she made herself. “He is very interactive,” said Davis, demonstrating it. “When you stab him in the goolies his eyes light up.”

She added: “Any political leader who expresses the hate he does has to be challenged. Whether we like it or not, he is the leader of the free world and he legitimises hatred – we have to try and counter that.” 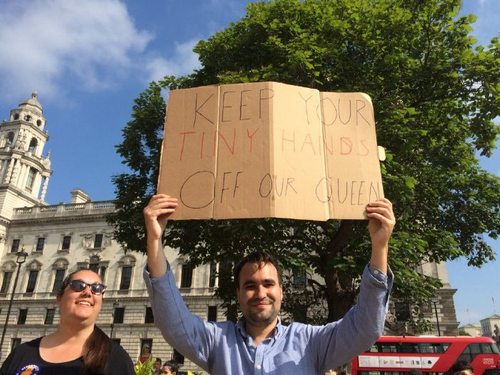 “KEEP YOUR TINY HANDS OFF OUR QUEEN” #TrumpBabyBlimp #TrumpUKVisit pic.twitter.com/SMPEdHvKpN

Holding up a handmade sign which said: “Keep your tiny hand off our Queen,” Joe Revill had taken the day off work to protest. “I felt I needed to be counted,” he said. “With his misogyny and racism he Trump is besmirching the institution of the presidency. He is tainting it and that will have a lasting damage.”

Without court to block pages with “justification of extremism”