A Novosibirsk entrepreneur has patented a new device for take-away drinks. In the coffee shops of the Chashka Kofe chain, you can now take away tea made from real tea leaves, not from a bag. Thanks to the new type of packaging, tea preparation takes less than a minute.

The creator of the packaging, a Novosibirsk entrepreneur Yuri Vereshchagin, even patented it and now hopes to turn the take-away drinks market. What is interesting about the new invention – in the material of Stas Sokolov.

Yuri Vereshchagin has been in Novosibirsk business for over 20 years. In the early 2000s, he opened almost the first private printing house created from scratch in the city. Then he was engaged in the production of packaging, albums for numismatists and much more. Now his hopes are connected with a contraption, for which there is not even a clear name yet – only the patent registration number.

In appearance, the invention of Yuri Vereshchagin does not look very impressive. It is just a strainer made of polymeric materials, which is inserted into a cardboard cup from above, allowing only liquid to pass through. The idea is to allow takeaway establishments to offer good loose leaf tea and any herbal and fruit combinations by brewing them right in the glass.

The strainers themselves are made from the same material as medical syringes. Yuri Vereshchagin says that they can be painted in any color, but this raises concerns among some consumers about the safety and origin of plastic. The presence of the dye allows, among other things, the use of recycled granules. And Russian rules so far prohibit this for utensils that will be used for food.

They were the first to experiment with the new technology in “A Cup of Coffee”. The idea is still making its way to consumers not without difficulty. An attempt to order such tea from the waiters leads to the fact that the girl offers to pour already brewed tea from the teapot into cardboard glasses. Which, of course, deprives the strainer of all meaning.

In principle, you can brew tea and immediately give it to the client without any strainers, just putting a bag in a glass. This is done, for example, in fast food (in those extremely rare cases when someone orders tea there). But Yuri Vereshchagin says that his invention is designed for those who want to drink good tea, “and not tea dust.” Plus, the teas in a glass are perfect for all kinds of herbal and fruit teas, where the establishment has the opportunity to offer something unique (or at least that looks like that).

So far, the price seems to be the main obstacle. The cost of the sieve is about one and a half rubles. To make money on their sale now, Vereshchagin’s enterprise offers sieves to wholesalers for three rubles and fifty kopecks, and cafes get them for five rubles each. For comparison: a standard disposable cup lid costs one and a half rubles. And the entire set (with a glass, a straw and a thermal insulating nozzle) will cost 10 rubles for small volumes. But Yuri Vereshchagin is confident that these costs will expand the market.

– If you calculate the cost of a barista’s work in a coffee shop, then something comes out about three rubles per minute. If you brew tea in a teapot, the client will have to wait. Then the barista needs to throw away the tea leaves, wash the kettle. In general, this is at least 5 minutes of time. Or 15 rubles. Three times more than the cap is worth.

If the cost of the drink for the buyer is 100 rubles or more, 5 additional rubles to the cost price are unlikely to be decisive. At the same time, the institution should receive additional customers who, in a different situation, would simply pass by.

– Not everyone drinks coffee, in principle, and not always even the one who drinks it wants a cappuccino or latte. But a person who knows at least a little about tea will not buy take-away tea in a bag. And good tea is quite possible, – says Yuri Vereshchagin.

In addition to tea (and herbal preparations), in this way it is possible to sell mulled wine, in which both a cinnamon stick and an star anise will float, and the cascara, which is only gaining popularity, is the dried berries of the coffee tree. This expands the range of drinks that can be taken away. At the same time, even a small point does not need any special equipment or a lot of storage space for this.

Drinking tea through Yuri Vereshchagin’s sieve is unusual at first, but, in principle, convenient. But only if you sit quietly on a bench or go somewhere leisurely. The sieve does not allow the drink to be consumed in the usual take-away trade – through a straw. Which allows you to slightly cool the contents of the glass, and prevents it from splashing.

Individual points that would specialize in selling tea in Novosibirsk can still be counted on the fingers of one hand. The ideal client for the strainers is, for example, the White Panda micro-network of two points, where Chinese tea is sold. It is brewed ceremoniously – in a teapot. While the process is going on, you can talk to the seller – you get a kind of express tea ceremony in an urban setting.

Since I had a couple of strainers with me, I decided to test the novelty in combat conditions and asked to brew tea directly in a cardboard cup. The seller was surprised, but complied with the request, so the purchase process took no more than a minute. The disposable dishes in the White Panda are a little wider than usual, so the sieve didn’t fit securely. But, since the glass is hot (and no thermal pads are given to it), you have to hold it by the upper and lower edges, so that the strainer is simply fixed with your finger. And I ended up going around the supermarket sipping Tie Guan Yin. Minus, perhaps, only one. Such tea requires short-term brewing, otherwise the drink starts to taste bitter.

Potential clients are also skeptical so far. Aleksey Nagibin, the founder and head of the Coffee Collective chain of coffee houses, says that he is, in principle, embarrassed by the appearance of another element of disposable packaging. Moreover, the modern food industry can already offer an alternative to the usual brewing.

“I think that in the battle between instant tea and this strainer, instant tea will win. There is a bag for cheap tea, porcelain for an expensive and respected product. If taste is so important to a person, then he can take the time to come to a cafe and order a kettle, says Alexey Nagibin.

The head of the Kuzina chain, Evgenia Golovkova, does not deny that tea itself can be in demand in the to-go format, but she notes that chain companies now have enough of what is already offered on the market in this genre.

“For example, we use“ sticks ”for tea – tubes made of a special material with fine perforations that allow water to penetrate inside. There is very high-quality tea, which is packaged in portions in fabric bags that already contain tea leaves, says Golovkova. 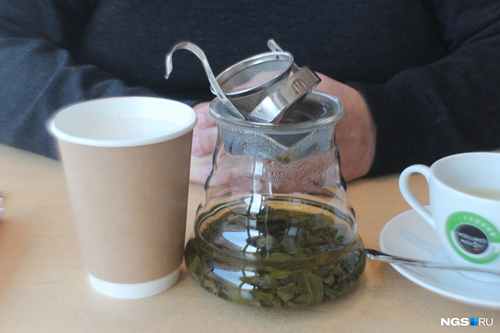 Nevertheless, the head of “Kuzina” admits that the innovation may be in demand among single establishments that offer some kind of original herbal mixtures.

However, the acquaintances of Yuri Vereshchagin have already found another promising niche for his invention – Russian prisons. “The strainer is the perfect solution for drinking chifir,” one of his friends aptly remarked on social networks.

Novosibirsk is rich in creative people who have come up with many interesting and useful things. Check if you can distinguish the real development of Novosibirsk scientists from fiction. Subaru crashed into onlooker taxi driver. I taught it a lesson