Bulat Barantaev faced the problem of hair loss after 30 years, but did not attach much importance to it. Now the man is 37 years old, and the hair on his temples has noticeably thinned.

If it had not been for the accidentally turned up clinic where the hair transplant operation is performed, Bulat would have left his falling hair alone, but since the chance was given – why not.

Correspondent Alena Zolotukhina talked to Bulat and asked him to tell how the hair transplant procedure goes, how much it costs and how long the result will last.

– I was not particularly worried about the topic of hair loss – yes, it does, but not critical. You don’t notice this every day, so it seemed to me that it was always like this, until a friend drew my attention to the fact that the problem was still progressing – we tracked the difference in the photo in social networks, and I saw that the hair on the forehead and in the temporal part the head became much smaller.

I didn’t have a goal to have a hair transplant, I just had a chance. For work, I went to Belgrade and, while I was there, wrote a post on Facebook that there was such a problem, friends responded and advised me two clinics. I thought, why not go, and signed up for a consultation. I didn’t want to shave, honestly, I didn’t even think about it, especially in terms of solving the problem of baldness.

In both clinics, they talked to me about the possibilities, with a special pencil they traced the hairline to the desired level, took photographs. Having compared the two consultations, I made a choice in favor of the clinic where the owner is a doctor and performs the operations herself, and not her assistants. My doctor’s name is Maria Balkovich – she is a very responsible woman, she has been working in the field for about 15 years, she constantly flies to various symposia on medicine, she is a perfectionist in matters of work – all this made me trust. 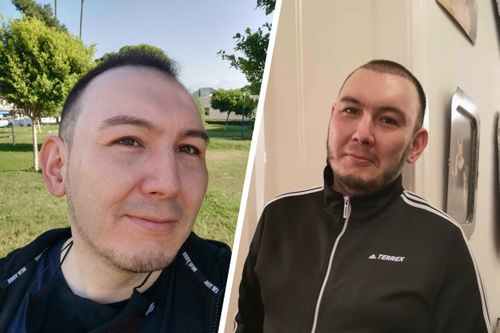 – Hair transplant operations are very common in Turkey, if you pay attention, at the airport somewhere in Antalya or Istanbul you can see men with freshly transplanted hair, with a bandaged head. In Turkey, clinics of various levels – world-class, with high prices, as in Europe, and mid-range clinics, with a lower cost of the procedure – in such operations are usually performed by assistants, and the doctor goes from the operating room to the operating room and controls the process.

The prices for the procedure are formed according to the number of grafts that need to be transplanted. (a graft is an element of the hair tissue of the head with hair follicles in it.

One transplant graft contains 1 to 4 follicles. – Approx. ed.). In Turkey, in an average clinic, 1 graft costs 1 dollar, in Belgrade 1 graft – 1 euro, in Western Europe the cost is much higher. At the initial stage, like mine, the transplant area is 1,500-2,500 grafts, my operation cost me 2,000 euros. With a more extensive baldness, 6-7 thousand grafts are transplanted.

How is the operation going

– I had the operation in two stages, under local anesthesia. Anesthetic injections are the most unpleasant thing that happened, the operation itself is painless. There were many injections with anesthesia, they are placed locally and cover a large area. At the first stage, the nape area is frozen, then the grafts are cut out with a special apparatus – perhaps they are stored somewhere for some time, perhaps the assistants are doing something with them, I do not know for sure. Then a break for lunch, rest, I was given decongestants and anti-inflammatory drugs to avoid the development of negative scenarios.

The second procedure is working with the frontal part of the head, on which special holes are made on the scalp, grafts are then transplanted into these holes. All this is reminiscent of gardening, especially the fact that then this area needs to be sprayed. During the operation, I realized how hard and painstaking work it is – the doctor works manually with each graft – the amount spent fully justifies itself. In terms of time, the first stage lasted about two hours, the second took about three hours.

– As I was told, there are two types of hair loss in men. Masculine (my case), when hair gradually falls out in the temporal part of the head under the influence of the hormone testosterone, and feminine – when baldness occurs on the crown, such an island is obtained.

Now my hair has not yet grown back as it should be, but visually the hairline is already visible. It seems to me that such things are read, with the correct hairline we perceive a person as younger – they told me more than once that I began to look younger, and a work colleague who did not know that I was doing the operation said that there was something in me something changed and I looked better. She sat on her grandmother’s neck: how the cat Altynka glorified the 84-year-old mistress Traffic accident on Red Avenue, where BMW X5 was thrown onto the sidewalk

How much time do we waste in traffic jams: stories of Novosibirsk residents