Former champion boxer Ricky Hatton took to Twitter to share a snap of a hearty cooked breakfast this week… but it wasn’t the food which captured the attention of masses of his social media followers.

The Hitman was in a buoyant mood as he was celebrating his birthday in Dublin, the morning after victories in the ring for Chris Blaney and Anthony Crolla and decided to celebrate accordingly.

Marking the occasion with eggs, bacon, sausage, hash browns and the full works, Hatton uploaded a photo of the huge breakfast – only for the food to be completely upstaged by his fellow diner. 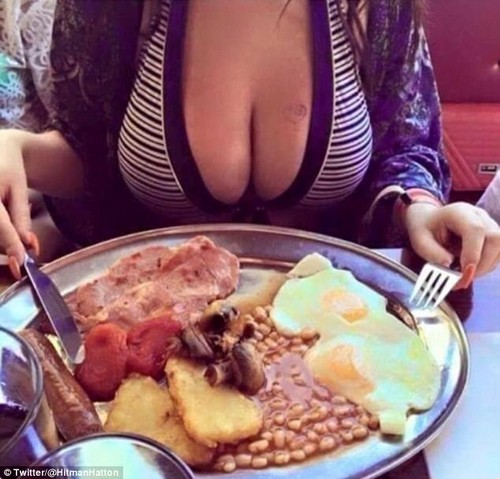 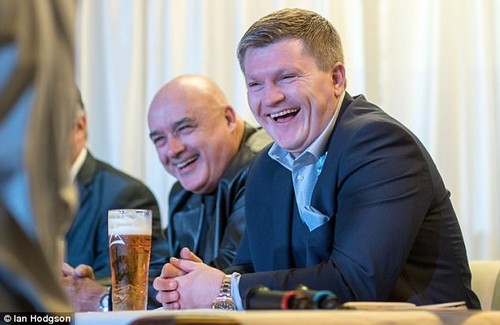 Accompanied by a female companion, Hatton seemed to be unable to keep her large cleavage from dominating the snap, leading many responses on social media to completely overlook the plateful of food.

Captioning the image Hatton wrote: ‘Last night wins for my 2 boys @ChrisBlaney12 @jakehaigh & after that to top it off @antcrolla won aswel. Treat myself this morning to breakie.’

Instantly the responses came flying in, with many of Hatton’s followers alluding to his morning company.

‘What breakfast?’ another fan quipped, comically implying he simply couldn’t see the food upon the plate due to obvious distractions.

Even Arsenal legend Ian Wright got in on the act, cheekily remarking: ‘Gorgeous breakfast Rick.’

It’s not the first time the Hitman has caused a stir on social media with a woman, after flaunting an image of himself in a Magaluf bar alongside a topless lady earlier in the year.

Revelling in the moment, Hatton simply wrote alongside the snap taken back in August: ‘Some t*ts out in Magaluf.’

Hatton seemed to enjoy his Dublin birthday and took to various forms of social media over the weekend to show it.

It’s not the first time Hatton caused a stir with a female online, after his recent Magaluf antics

He watched on as close friend Chris Blaney won the BUI Celtic title after defeating Matiouze Royer, before partying into the night.

A video via Instagram showed the former champ blowing out candles on a large cake, of which Hatton joked: ‘How the fecking hell am I gonna shift this timber?’