But Lavrov stressed it was important “not to switch to the other extreme which we saw during the ‘BLM’ (Black Lives Matter) events and the aggression against white people, white U.S. citizens.”

Founded in the United States in 2013, Black Lives Matter is a movement which became a rallying cry after the killing by U.S. police of an unarmed black man, George Floyd, last May.

Russian Foreign Minister Sergei Lavrov on Thursday warned that anti-white racism might be building in the United States and said that political correctness “taken to the extreme” would have lamentable consequences.

In an interview with political scientists broadcast on national television, Moscow’s top diplomat said Russia had long supported a worldwide trend that “everyone wants to get rid of racism.”

“We were pioneers of the movement promoting equal rights of people of any skin color,” he said.

The movement has led to a major debate about race, rights of people of color and the toppling of statues of figures linked to slavery or colonization in countries including the United States and the United Kingdom.

Lavrov accused the United States of seeking to spread what he called “a cultural revolution” around the world.

“They have colossal possibilities for it,” he said in the interview.

“Hollywood is now also changing its rules so that everything reflects the diversity of modern society,” he said, calling that “a form of censorship.”

“I’ve seen Black people play in Shakespeare’s comedies. Only I don’t know when there will be a white Othello,” Lavrov said.

“You see this is absurd. Political correctness taken to the point of absurdity will not end well.” 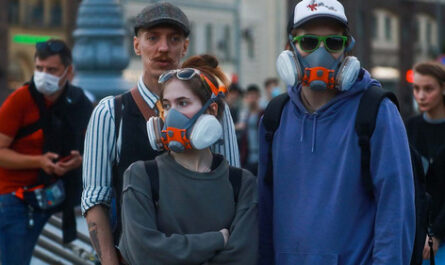